At the October break: Forwards

Share All sharing options for: At the October break: Forwards

With United sitting idle until Saturday during the international break, we thought it'd be a good idea to take a look at the squad position-by-position.  Please note that we wrote the forwards prior to England's international with Montenegro.  Today we start up front:

CPC:  What hasn't been said about Rooney's start to the season?  Every pundit has had their say and I even bumped Sir Alex out of the way when I gave Rooney 2 weeks off.  But, his ankle wasn't as bad as initially thought and now he's off training with England...whether he plays against Montenegro remains to be seen.

Sir Alex is going to give him plenty of chances to play.  Hopefully he realizes this and try and relieve some of the pressure that's weighing him down.  Has the pressure gotten to him?  It would appear so...he gets the ball in the box and instead of trying to get past the defender, he's looking to see who he can pass to. Perhaps that's the killer instinct Sir Alex should have been talking about.

Section 312:  Only the English press would threaten to reveal damaging details about a players personal life during the World Cup. It’s no wonder England never perform at the biggest tournament in the world. Rooney was out of sorts in South Africa and has brought that form back to the league with him. I have seen a lot of positives from Wazza though. His touch, vision, and passing have all been good and his movement is still excellent. I think as his personal life starts to mellow out a little, and if he can stay out of the spotlight as much as possible for the next couple years, he will regain some form. I would still love to see Wazza and Hernandez get a start together against a weaker team, WBA perhaps, because I think their games would mesh well and Rooney just needs a good match to spark his season.

MUCH MORE AFTER THE JUMP:

GOAL SCORERS AT THE OCTOBER INTERNATIONAL BREAK SINCE 2008:

CPC:   I think his retirement from the Bulgarian national team is what has helped his play most.  Unlike Rooney, Berbatov started his preseason with the rest of the squad and traveled to the United States on the preseason tour.  There, he was able to get into the form that made him a £30m transfer from Spurs.  His 6 goals is tied for the Premier League lead through 7 games and there's no reason not expect at least 25 goals from him.

Moving forward, the only thing he can do is play games.  As I said a couple weeks ago, his supporters have always claimed he needed a run of games to get going....he's had them and he's going.  I expect that to continue for the foreseeable future.

Section 312:  The man everyone seems to love to deride. Lazy, languid, flop or whatever else you wanted to call him Berba has been a whipping boy since he joined United. I myself always defended him and I always will. His movement is first class, his touch may be better than Wazza’s and he isn’t an out and out striker so goals will never be his main contribution to the team.

More than anything I think Berba has benefited from the team being set up to utilize his talents more efficiently as well as the players really finding ways to play off of the Bulgarian. I am not so sure Berba’s form has really improved as much as the players around him have improved how they take advantage of his ability.

CPC:  We haven't seen a TON of him yet.  But what we've seen has been quite exciting, hasn't it?  I'll admit, I'm a bit confused as to why after playing only 15 minutes (and scoring the winner) against Valencia he didn't get the start against Sunderland.  He has 2 goals in 7 appearances since the Community Shield and once he gets used to the rough-and-tumble world of the Premier League, I'd expect those numbers to come up. He has the pace and his ball control looks pretty good.  It also appears that Sir Alex is impressed as well and it's pretty apparent that he's ahead of Owen and Macheda in his pecking order.

Section 312:  He looked great at the World Cup and has looked good in flashes for United. Pace and finishing are too things you can’t teach and he has them in spades which is very encouraging. He needs to work on his movement and his ball usage. I think that is why he has seen limited action on the pitch for United this season. Reminds me a little of Andy Cole in the early days when he bombed around poaching goals but not really contributing to the team structure and the build up. Once he gets some more time on the training ground I think he will improve in leaps and bounds. If he is easy to work with and coach he may be forcing his way into a 3 man strike force by the end of the season.

REST OF THE STRIKE FORCE: 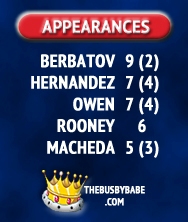 CPC:   Beyond those three, we haven't seen a whole lot from the other forwards yet this year.  Michael Owen had his brace against Scunthorpe in the Carling Cup and headed the equalizer away to Bolton.  Even that goal was pretty lucky as it only glanced off his head and barely hooked inside the far post.  Federico Macheda has mostly seen mop-up duty and the rare start. In his last start he ran out with Michael Owen against Sunderland, and together they were wholly ineffective, though the midfield didn't give them a lot of great chances, either.  Macheda has looked really impressive the couple of times he wasn't pushed to the wing in a 3 man front.

Section 312:  I am not so sure Owen is anything more than a Carling Cup player at this point. He is good to have around just in case he is needed, like Wolfsburg last season, but should be reduced to cameos at this point. Macheda, like Hernandez, shows flashes but consistency and overall play are lacking. I may be too attached as I have been following his career for a while now but I still want to see Welbeck given a real shot to break into the squad and be an elite player for United and England. I hope his loan goes well and he is given that shot, and is ready for it, next season.

Competition notwithstanding, you're Sir Alex and need to pick two forwards.....who are you taking?

CPC:  With Rooney being out of form, I think I'd rather just see him come from the bench...so that puts Berbatov with Hernandez.  I think beyond needing your top pairing, Roo would swap out with Berbatov a lot and Macheda with Hernandez.  Toss Owen in every so often with just about anybody.

Section 312:  Depends on the opponent but right now Rooney and Hernandez for reasons I stated above. Berba and Rooney for big matches as an out of sorts Rooney is still better than an inexperienced Hernandez and against the better opposition United need Rooney’s ability to unlock defences with his final ball as well as his ability to track back and make an extra man in midfield.

By seasons end, how many goals do you expect from each forward?