At the October break: Central Midfield

Share All sharing options for: At the October break: Central Midfield

Section 312: Still the man with the answers for United when confronted with a difficult defense to unlock. Scholes has all the passing ability in the book and has looked good for the most part this season once again. Despite Arsene Wenger’s needless attack on Scholes so called "dark side" he continues to receive well deserved plaudits for his play. I love Scholes in the middle of the park going forward but I am starting to wonder if having him in a two man central midfield configuration is contributing to our weakness at the back. Scholes just can’t get back to help defend as quickly as he used to when he goes forward. Might be more effective in a 4-3-3 type set up with Anderson and Fletcher behind him or Fletcher beside him and Anderson or maybe even Rooney as the midfielder who goes higher up the pitch.

Still looks like he has lots left in the tank though and continues to provide United with quality service and ball retention.

Then last season happened.  He rediscovered some youth.  Sir Alex didn't try and play him every game, or even every important game, but he kept a good pace to the season and was relatively healthy most of the year.  He got back to 7 goals and already has 1 this season.  He and Giggs continue to make great connections and open up opportunities for the strikers.  I was so wrong about this guy a couple of years ago...I'm glad I was wrong.  Now if only we could do something about those rash challenges...

MORE MIDFIELD AFTER THE JUMP! 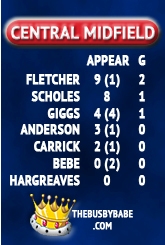 Section 312: Has been just as good as last season so far. Fletch has not slowed down now that he is firmly in the first team picture. He continues to play as if he is still battling it out just to get into the team. That’s what he needs to do though as he still lacks some of the ability that his more illustrious team mates are blessed with. But you need a Fletcher in every squad and he provides a valuable service.

His tackling, tracking back, defensive cover and ball retrieval are all vital to the cause and he is an under rated passer as well. Nice to see him popping up further up the field at times and being effective as well. He continues to impress me with his work ethic and his game continues to develop. I am certainly glad he plays for United.

CPC:  Darren Fletcher is one of those guys who you see in the starting 11 and forget about until he does something spectacular.  I don't mean that in a bad way...he just fades into the game.  Which is perfect for what he does for United.  He's kind of a jack of all trades, really...he can get forward on smart runs and attack the net, he's a moderate threat in the box on set pieces, he can get back as deep as he's needed to support the defense, he's pretty clinical in how he defends people...he doesn't get booked often and he distributes the ball well, playing down the wing as necessary.  What else could you ask for from the guy?  He's a fixture in the starting 11 and isn't going anywhere anytime soon. 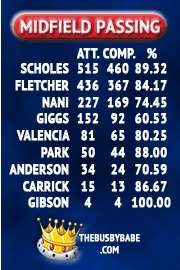 Section 312: Haven’t seen much from him this season due to injuries but from what I have seen I am not happy. His loss of form seems to be something more serious and I don’t see it coming back. He was always limited as a player and those limitations seem to be more and more detrimental and his passing ability no longer compensates. Would not be unhappy to see him leave at the next opportunity.

CPC:  See, that's where I was after 07 with Scholes....I'm going to want to see more of Carrick to give him the boot already.  He hasn't had much of a run at all this season...missing the preseason tour after traveling to South Africa, then picking up a knock in the last preseason game, then another knock recently.  I'd like to see him get a string of 4 or 5 games and see where he's at then...maybe let him get a game or two in with the Reserves if he needs the fitness.

Section 312: In his limited time since coming back from injury I have been encouraged by what Anderson has been able to provide. His work rate is excellent and I think in time that ability going forward will re-emerge. I am firmly on the side of the argument that Anderson has a lot more left to offer the club and SAF is the man who will get it out of him. It is far too early to write Anderson off.

CPC:  I'd like to see another year out of Anderson, but the writing writing appears to be on the wall.  A year ago, I thought he was the better of the 2007 summer signings (the other being Nani) but Nani's progression has kinda left Anderson behind.  His recent car accident shows a bit of immaturity still (see also: Charlie Davies) and now that he's healthy with a couple of games under his belt, he's getting linked to a return to Porto?  Sorry Anderson, you've had your time and I'd just soon a more deserving player wear the #8.

REST OF THE CENTER OF THE FORMATION:

Section 312: Hargo continues to threaten a come back without providing one. It is a shame since I love him as a player. Gibson, not unlike Carrick, has limits to his game that he needs to find ways to over come. No one else, with the exception of maybe Cleverley, seems to be coming over the horizon from within the club to provide a challenge to the Scholes' and Fletcher's of the world.

CPC:  Regardless of what Hargreaves says he's going to do, if he doesn't make it back to full health or suffers another long-term injury, he's got to go.  4 appearances in the last 2 seasons for Hargreaves, highly touted by many prior to joining United from Bayern Munich.  Not exactly what Sir Alex thought he was getting for £17m.  Hopefully all with all this rehab, he'll come back to his form from a few years ago, but that's looking less and less likely.

Bebe has come in amid a ton of press and looked...ordinary.  Nothing really overly impressive other than his stepover.  He does have a good frame for his age and maybe he'll develop into something special, but I've only seen him in his 2 appearances for United and a U21 Portugal game.

I said before I'm not sure why you announce that your pulling a player back from loan in October but it appears to be the case.  Having now looked at the rest of the midfield, I think I see why Sir Alex may want to do this, the least of which centers around the health of Carrick and Hargreaves and the age of Scholes.  But all of that remains the same as it was at the end of August, when he went out on loan in the first place.  At any rate, he looked impressive while on tour in America and has performed well for Ireland this season.

[Note by CPC, 10/13/10 6:09 PM PDT ] Statistics for the first two graphics come from StretfordEnd.co.uk and the last graphic from The Telegraph.

STAY TUNED FOR THE REST OF THE MIDFIELD TOMORROW!