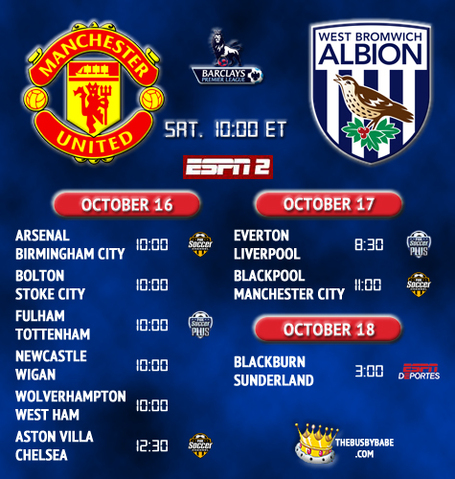 Decent schedule this weekend, televised live at least.  Sunday's Merseyside derby should be interesting with the recent happenings at Anfield and the High Court.  Also, I can't find a live English language broadcast of the Blackburn/Sunderland match on Monday.  Here's the schedule for the games that will be televised delayed:

There's also a pair of Championship games on this weekend, both delayed:

What other games will you guys be paying attention to, football or otherwise?

For me, immediately following the United match, I'll watch Missouri and Texas A&M in college football (Sat 12pm, FSN) then probably either a replay of the United game or the 2 minute highlights of each game, before watching the Sprint Cup race in Charlotte (Sat 6pm, ESPN).  Then maybe I'll watch some highlights from the Mexican League on one of the Spanish channels.  Sunday, I'll probably get up and Red and Blue fight it out at Goodison (Sun. 8:30am, FS+)  then I'll watch the Citeh game (Sun. 11am, FSC).  After that, I'll watch Missouri and Texas A&M in women's soccer (Sun 5pm, ESPNU) before watching an EPL game from Saturday (TBD)