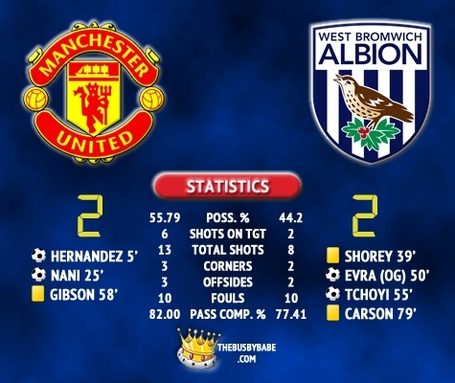 "They got a real break for the first goal. I didn’t think it was a foul. But they got the luck after that, it came off the inside of Evra’s leg and it was just a bad bit of luck. The second goal… what can you say? Edwin has been playing for over 20 years as a top goalkeeper and he was probably in primary school the last time he made a mistake like that. You just have to wipe it off the slate. There’s nothing you can do about it, it was just one of these inexplicable errors."

"We need to start killing games off. We must take our chances and score more goals when we can. We need to work hard and show our character and I'm confident we can do that."

VIDEO HIGHLIGHTS PLUS ALL THE LATEST WAYNE ROONEY LINKS AFTER THE JUMP:

Yeah, I figured with everything going on, it was time to break out the Rooney Watch.