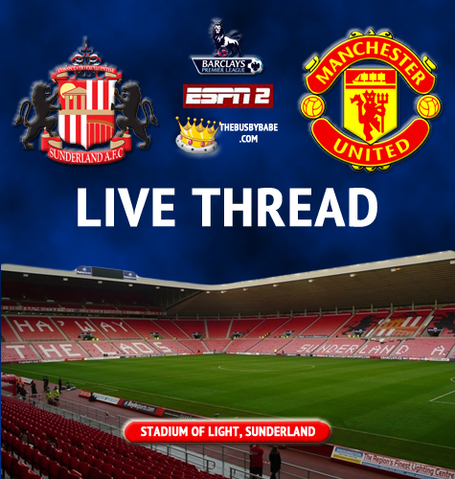 I help a friend out at night who owns a small market up the street from me. He sells a bunch of beer and tobacco products and I don't live in the greatest neighborhood, so I go hang out with him for a little bit at night...gets me out of the apartment and he likes having someone around "just in case" something happens. I got tied up over there and wasn't able to make a proper From the Back Pages post for today.  I also didn't get much of a chance to write any big preview up, so I'm gonna merge the pertinent links with the live thread and drop the rest of the links in a huge post tonight.  As you can see, I've been steadily improving my graphics...if you have any ideas PLEASE suggest them, I'm always looking for something new to try out.

On to the links:

“If we under-perform it’s going to be tough.  We know all about the atmosphere there – if Sunderland win a throw-in or a free-kick their fans cheer as if they’ve scored. We have to control the crowd, keep possession and make sure we keep Sunderland pushed back as much as we can." John O'Shea ( ManUtd.com | Sky )

"Travelling back from Valencia and not getting in until 2.30am [on Thursday] is an issue for us and we've had to check Rio [Ferdinand], Michael Carrick and Anderson because it was their first real game for six months. Rio played against Rangers and against Scunthorpe but that was a real game on Wednesday and you have to go back to April when he was playing consistently a few games in a row.

"Anderson had one game against Scunthorpe but he hadn't played since his cruciate injury against West Ham [in February] so it was a big night for those players, a really big night coming back into the team in such an important occasion. So we had to check them." - Sir Alex Ferguson ( Guardian )