What's next for Manchester United and Wayne Rooney?

Share All sharing options for: What's next for Manchester United and Wayne Rooney? 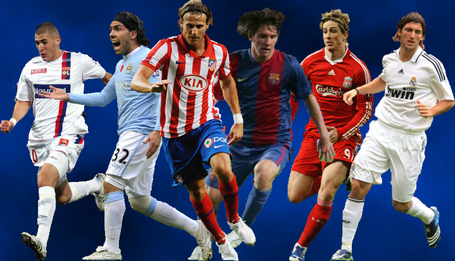 Since it seems likely Rooney is leaving (I still hold a small amount of hope things can be rectified)seemed like fun to take a look at the bookies and see what they think. Remember, the numbers are for entertainment purposes only:

According to this site, Betfred (interestingly enough, a sponsor of Manchester United) is offering the following odds on who Sir Alex buys to replace Wayne Rooney (no, they don't offer a bet on United keeping the money to pay down their debts):

Where do the bookies have Rooney going? Check it out after the jump:

All of these odds were taken from this source.

The first of the three teams I think could actually afford Rooney and his demands, it also appears the most likely destination for a couple of reasons.

For one, Wayne bought property in Prestbury and had his own mansion built. Secondly, he's a local, growing up just 45 minutes away in Liverpool. Lastly, it appears he and Coleen are trying to work things out and she's doesn't want to be far from her 12 year old sister who is said to be seriously ill.

The only real possibility for Wayne Rooney outside of England, I think. They have the money to buy him outright, but they could do a cash+player deal with the players they have laying around. Obviously, it would re-unite him with former teammate Cristiano Ronaldo and give them a chance to rediscover old success under the direction of Jose Mourinho.

With Rooney's form somewhat off right now (though it can certainly improve by January), he likely wouldn't feature right away with Real, which they can accomplish with a pretty deep bench. However, if Real spend a lot of money to get Rooney, he'll be under pressure from the supporters to feature soon and they'll be quite vocal if he doesn't perform to their expectations.

I think this is the least likely destination on the 'Favorites' list. Their club debt is 58% of it's overall value, so there's likely little funds with which to draw from . Add to the fact that if Rooney is leaving Manchester United due to it's financial problems, it's doubtful he'd want to join a club in the midst of their own financial problems.

We Ain't Got No History talks about the possibility of Wayne Rooney moving to Chelsea.

The last of the three clubs that can likely afford him, he would be surrounded by an already successful squad with yearly title ambitions. It would be a good fit for Coleen as well, as she attempts to get her TV acting career off the ground and she'd still be reasonably close to her sister. Wayne would likely be the spearhead of a new generation of Blues as players like Terry and Lampard are phased out and youngsters like Daniel Sturridge and Jack McEachran step up.

What do you think? Who's your dream buy with the kitty Sir Alex gets for Wayne? Need an account? Click here and set one up!