I'm sure the last few days have been trying for most people around the Manchester United organization, but Alex Ferguson's message was clear: he wasn't to be bothered with the Wayne Rooney circus today.  I'm also sure that that was the message he delivered to his team today: concentrate on Bursaspor and forget the nonsense.

The team started strong out of the gates, DOMINATING possession during the first 10 minutes of the game and spent nearly all of that time in their attacking third.  They nearly got on the board in the 4th minute when Anderson neatly threaded the needle past 3 Bursaspor defenders with a through ball to Federico Macheda.  Unfortunately for him, the angle was too acute for an honest shot on goal and the rebound was cleared out of bounds by a Bursaspor defender.

CHECK OUT THE REST OF THE MATCH REPORT AFTER THE JUMP: 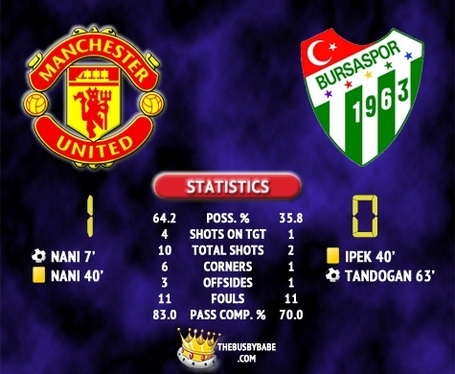 On the 7th minute, Nani put a move on the Bursaspor defender, who strangely went to ground on a slide tackle, took the ball to the edge of the box and hit and absolute bullet to the far side of the goal.  Replay showed that the ball had some movement on it and hooked inside the far post.  It was an absolutely brilliant goal and there wasn't anything Bursaspor could have really done to stop it after defender went to the ground on his challenge.

After that, it seemed like United took their foot off the gas, because the game just got mired down in midfield, with neither team posing much of a threat.

Bursaspor's strategy must have included trying to rattle Nani's cage a bit.  It appeared that he was tackled hard at one point as he rolled around on the ground.  In the 24th minute, the ball got out of his reach and he slowed down to gain possession again and was leveled by the Bursaspor LB.  Three minutes later saw him catch a wayward hand to his nose...there was certainly no intent, but he went off with a bloody nose and as Wan Ihite put it: "They’ve stuck a Q tip up there for him."

At the 40th minute, as the ball rolled towards the corner, Nani got tangled with Ozan Ipek.   Ipek pushed on him as the were going out of bounds and Nani kicked at him, so Ipek put his hand on the back of Nani's hand and pushed him away.  Both players were cautioned for their actions.

After halftime, Bursaspor made two substitutions (Ibrahim Ozturk on for Milan Stepanov and Turgay Bahadir on for  Sercan Yildirim) but the midfield stalemate continued.

During the live thread, I said there was signs of life for United after Anderson put Park into the box in the 57th minute on another fantastic through ball, even though the keeper snuffed that attack out.  During the next minute, Evra got possession of the ball and went on a nice run down the left, crossing the ball from the left edge of the box, only a few yards from the touchline.  It wasn't meant to be a shot (certainly not with the left foot) but it nearly curled in, were it not for an alert keeper.

Gabriel Obertan came on for Ji-Sung Park in the 71st minute and Javier Hernandez came on for Anderson and it appeared to provide a little spark to a side that had been totally lacklustre since Nani's first half goal.  Hernandez had a cheeky over-the-top pass to Obertan on the left to send him down to the corner.  In the 82nd minute, Obertan gained possession on the touchline, just inside the box on the right and provided a series of stepovers that might have left the Bursaspor defenders dizzy, but nothing came of all the show.

Hernandez only had a couple of shots on goal...his first from the top of the box in the the 84th minute was weak and easily taken care of and another shot from the right side of the box skidded wide of the net in the 87th.

In conclusion, while the 3 points are certainly important, the overall quality of play was poor after Nani's goal.  Granted, we were missing some key players, but this lineup should have easily put 4 or 5 goals, probably more than that on a Bursaspor club that is ranked the lowest of the remaining 32 clubs in the Champions League.

Yes it was a win, but in the Premier League against the mid and lower table competition, today's result would have ended in a tie....or worse.  Manchester United must find that spark of creativity they have been so desperate to find this year....a year which is looking more and more bleak.

What did you guys think of the match?  What do you think was missing that prevented United from really lighting up the scoreboard?  Need an account? Sign up for one here and join the conversation! 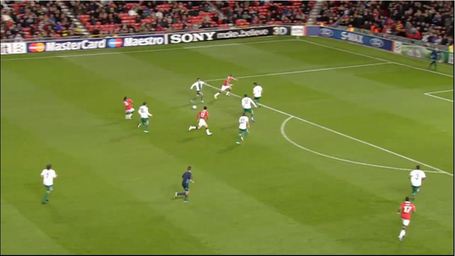 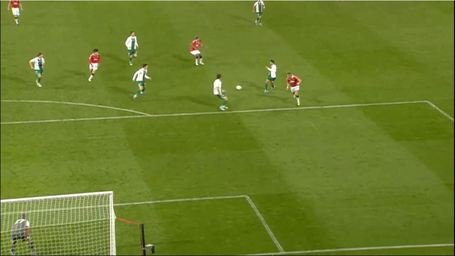 Screenshots from Anderson's through ball to Macheda in the 4th minute taken at roughly the same time.