Stats from the BBC, not all available

46,083 showed up to Old Trafford tonight in between rainstorms to watch Manchester United defeat Wolverhampton Wanderers 3-2 and advance to the quarter finals of the Carling Cup.

The first fifteen minutes saw an outstanding display of skill from Gabriel Obertan, who set up Darron Gibson in the 7th minute and then on the next possession in the 8th minute made a great turn to get around a defender, but his cross was deflected out of play.  After the first quarter hour or so, Obertan's touch seemed to get heavier and he wasn't ever able to control the ball as well, until about the last 10 minutes of the game.

THE REST AFTER THE JUMP!

Bebe was perhaps the most impressive throughout a relatively tame first half, finding the ball more on instinct at times.  He got the ball forward several times and looked good in battling with the defender to maintain possession.  In the 23rd minute, the ball got away from him in his own half and he recovered with a clean tackle that knocked the ball out of bounds and kept Wolves from countering.

In the 33rd minute, it looked like United were going to have an easy chance on goal when Obertan had the ball with miles of space on the left side.  I called it incorrectly during the match, but Macheda pointed to the far post and Obertan passed it like Macheda was going to the near post.  Wolves were able to easily gain possession and clear the zone: 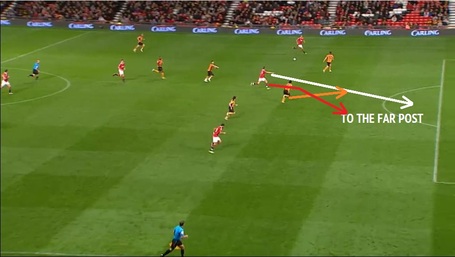 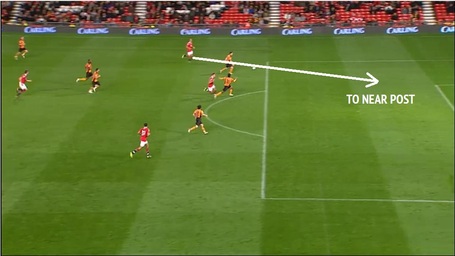 Wolves pushed up several times in the half, Wes Brown and Fabio seemed to have the corners on lock down and Chris Smalling looked really good getting from side to side and still maintaining a presence in the box.  Wolves never seemed to get much of a chance at goal in the first half.

Both teams came out of the dressing room ready to play in the second half.  There was a lot more up and down movement and there seemed to be a certain flow about the game that wasn't there in the first half.  The 47th minute saw Michael Carrick blast a shot over the top of the goal, the second time he'd done that all evening.  In the 52nd minute, Obertan set up Macheda brilliantly whose shot from the left wasn't that far from the inside of the right post.

In the 55rd, Obertan took three defenders to the corner with him, he passed it out to Gibson and over to Carrick near to top of the box.  Both central defenders came toward Carrick who slipped the ball in behind for a wide open Park, who kicked it right to the keeper when it should have been United's first goal.

Wolves took the ball back down and took a shot that was deflected back out of the box and quickly moved down field.  Bebe got the ball and took it down towards the end line and as he ran out of room, he looked to poke it into the air towards the far post.  Luckily for him, it deflected off Mouyokolo and hooked JUST inside the net.  The linesman gave the goal and it appears to be the correct decision: 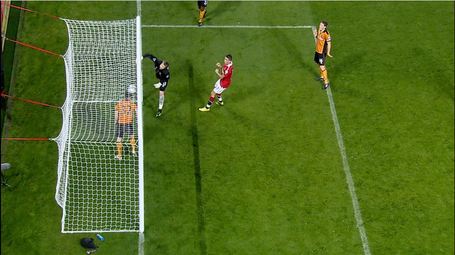 Just 4 minutes later, Wolves were able to equalize as George Elokobi headed in a corner kick and caused the Wolves supporters to be heard singing throughout Old Trafford.  After Darren Gibson's yellow card in the 67th minute, Jonny Evans stands still in the middle of the box while Fletcher dances around him and gets a great shot off, that only just went over the bar.

Ji-Sung Park put Manchester United back in front in the 70th minute after a somewhat lucky give and go with Macheda.  He hooked one into the top right corner with his left foot that left the goalkeeper stuck in his footprints.  If you read through the live thread, you saw 312 and I discussing the play, where I thought Macheda should have slipped in for a pass and 312 thought he should have gone wide, but in the end it doesn't matter, because it resulted in a needed goal.  Here's an image if you were wondering, the blue is what 312 thought should have happened and the red and white are what I thought: 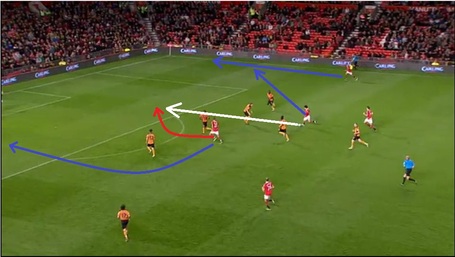 With the 2-1 lead, Sir Alex Ferguson opted to bring on Gary Neville for Fabio in the 74th minute, but just two minutes later, Johnny Evans was nutmegged by Kevin Foley and the game was again level at two apiece. 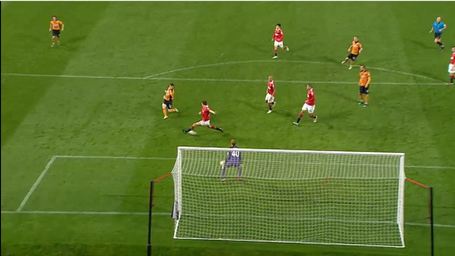 The 81st minute saw the addition of Javier Hernandez to the game, coming on for Bebe who received a well-deserved applause from the United faithful.  After that, United looked a different, more confident team.  Obertan nearly found the form he had early on in the match, making a run down the left side in the 83rd minute that saw him unable to catch his own touch out of bounds. Two minutes later, he was presented with an opportunity to pass to Macheda or shoot, electing the latter and the attempt goes over the bar.

As it appeared the match was headed to extra time, Darren Gibson lead a counter attack across midfield and found Javier Hernandez on a run between defenders.  As Chicharito reached the last defender, he juked around a sliding Wolves defender and buried the shot in the top left corner to send United on to the quarterfinals of the League Cup again.

Javier Hernandez will go down as the man that closed out yet another opponent and his current run of form will surely see him starting against Spurs on Saturday.

Overall, you can't help but be happy to get a win against and arguably better lineup and the opportunity to scout an opponent that we'll see again in a couple of weeks.  You have to be happy that Bebe played particularly well, though disappointed in Mechada.  Obertan had flashes of pure talent, but was just too strong with the first touch most of the match.  It's a learning experience, that's for sure.