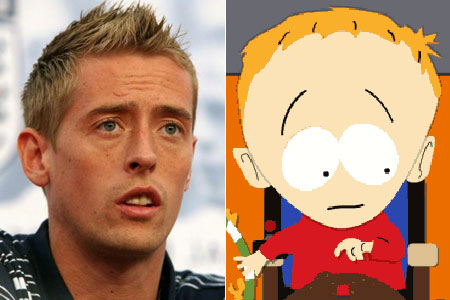 Is Timmmmmmmaaaaaayy from South Park based on Peter Crouch? The .gif below suggests so:

Manchester United face their first challenge from a top 4 club from last year as Tottenham make their way up from London for this evening-time kickoff on Saturday.

READ THE REST AFTER THE JUMP!

Tottenham come into the match on a weeks worth of rest, after being eliminated from the Carling Cup in the last round and it's possible that they have an eye on Tuesday's Champions League fixture with Inter Milan in mind.  Harry Redknapp says he may rest Gareth Bale (Spurs leading goal scorer with 6 in all competitions) for that match, which could be a signal of his priority this week.  Injuries are one of the things that's plaguing Spurs this season, as they come into the match with 7 players listed as injured.

Manchester United come into the match on the heels of their win away to Stoke last weekend and Javier Hernandez's late winner against Wolverhampton in the League Cup.  I expect a pretty strong lineup, with United having to travel away to Bursaspor at mid-week and a League match against Wolverhampton next week.

I expect United to win this one, but a draw wouldn't surprise me.  Outside of a set-piece, I think Spurs only real chance at netting goals will be through either Luka Modric or Rafael Van der Vaart.  Being that I expect United to run out in a 4-3-3 and push forward, it's going to be vitally important for the midfield to get back into a defensive position, even more so if Evra is pushing forward.  Frankly, if United can get a two or three goal lead, I'd just soon they sub in some defensive help and build a wall in front of VDS.

The Daily Mail: Ryan Giggs, Michael Owen and Wayne Rooney all ruled out

The Daily Mail: Tom Huddlestone remains out along with captain Ledley King

A few bullet points from the previews: