Manchester United has all but punched their ticket to the next round of the Champions League, after defeating the reigning Turkish champions 3-0 Tueday night in Bursa, Turkey.

10 minutes into the match, Gabriel Obertan set the ball up for Dimitar Berbatov, who fired a shot at the goal, but Dimitar Ivankov dove to his right and made the save.  Things didn't improve much for Berbatov, who really appeared to struggle after Nani went off in the 24th minute with an apparent groin injury.

After Nani went off, United played really well for being a man down until the introduction of Park Ji-Sung in the 29th minute.

READ THE REST AFTER THE JUMP:

Shortly thereafter, Berbatov found some space just past the halfway line and attempted spring Obertan into the clear, but his touch was just a little bit too heavy, as Ivankov was able to get to the ball before Obertan.

In the 38th minute, Paul Scholes appeared to have opened the scoring as he split a couple of defenders for a fairly easy shot into the bottom left corner.  However, the ref had blown the play dead and (rightly) called Scholes for a handball, as the ball popped up and bounced off his bicep.

Beyond that, there really wasn't much excitement about the first half of the game.  That all changed after tea time in the changing room.

Whatever Sir Alex said in the dressing room worked, as just 3 minutes into the 2nd half, Fletcher scored his first goal ever in the Champions League away from Old Trafford.  But really, as you can see in the pictures below, it was the great play from Obertan and Berbatov that set him up (click on pictures to enlarge): 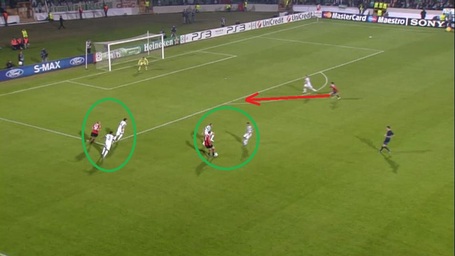 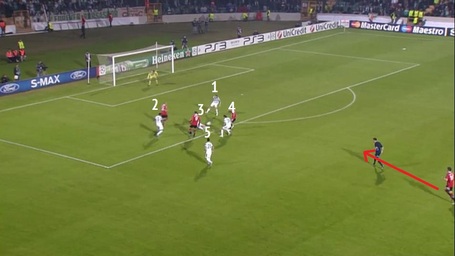 Picture 1: Obertan and Berbatov each draw two defenders to the left, while Park crosses the pitch, looking for a pass.
Picture 2: Effectively 3 vs 5, Michael Carrick enters the picture with nobody marking him. 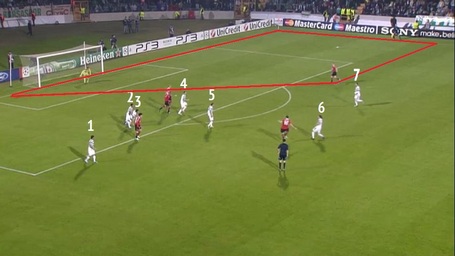 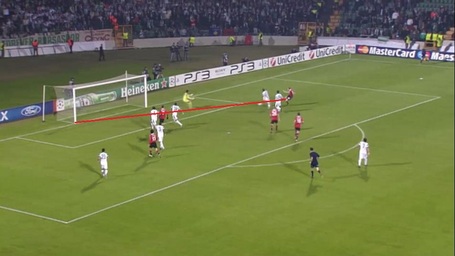 Picture 3: When Carrick looks up, he sees Fletcher in miles of space (the red box)
Picture 4: Fletcher gets the pass, has a perfect first touch, and puts the ball in the left side of the net.  Ivankov dove, but was never going to make the save and a pair of Bursaspor players tried to slide in, but were too late.

Ten minutes later, Obertan and Fletcher were playing a little keep away from the Bursa defense, when Fletcher went down with an ankle injury, paving the way for Bebe to make his European debut.

Obertan wasn't done...in the 73rd minute, Park brought the ball up from midfield and slotted the ball for Obertan, who started left, cut back behind the defender and sent an absolute blast into the roof of the net from 20 yards out.  It was a fantastic goal, to cap off what was really a decent game for the young Frenchman.

Just four minutes on, in a gaggle of players at the top of the box, Scholes looked poised to take a long shot of his own, but instead slid the ball up to Bebe, who hit a trickler past a diving keeper to make the scoreline 3-0 and secure 3 points and probable qualification for the knockout phase.

As always, I don't do player ratings, but if I did, Berbatov would easily be the lowest rated Red.  After Nani's injury, United seemingly went from the 4-3-3 to a 4-5-1, and Berba really never looked very comfortable as the lone striker. He could be seen sulking and barking at his team mates and was offsides at least 3, probably 4 times.

Rafael was really a mixed bag tonight.  His immaturity showed as he made several foolish tackles and got to point where Mark Clattenberg look-a-like Wolfgang Stark had to very sternly tell him to he'd had enough at around the hour mark.  He got forward really well and put himself into positions to make a difference, but like Ronaldo and Nani, seemed to be looking for a foul that wasn't really there, taking a couple of dives in the box.

Yeah, I said it...I'll call it diving when I see it, regardless of who the player is....I can't stand it.  Man up and knock the defender over if you have to, but don't just fall on the ground and give up a great chance because you "hope" to get a penalty.

Obviously, Obertan and Bebe shined, which was really nice to see...it's a long season and we're going to need the depth come March and April when the matches start stacking up.  Chris Smalling played a very workman-like game in central defense while Rio Ferdinand and Robbie Savage continued the verbal sparring over Twitter.

With two games to play in the Group Stage, United stand on top of the table, three points clear of Valencia and five clear of Rangers.  All that's needed is one point from six to see United through.