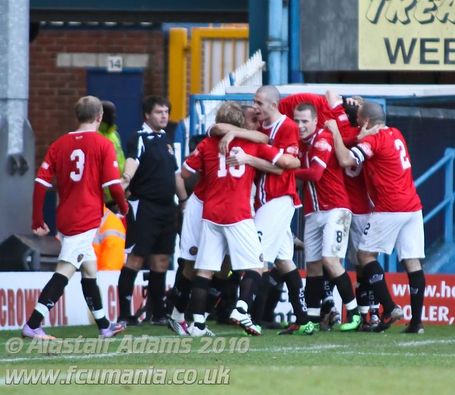 via Alastair Adams at fcumania.co.uk

[UPDATE] Just go ahead make this the live thread...I've got the game pulled up...exciting times...

First things first, we're not changing to an FC United blog....I just thought it'd be nice to take a look at FCUM's first ever televised match.  In England, it will be on ESPN and in North America on Fox Soccer Plus. To be honest, I'm doing this a bit tongue-in-cheek, especially since I still need to work on my preview of Wolves.

To give a very brief (and general) history:  FC United of Manchester was created on 2005 by fans who were protesting Malcolm Glazer's takeover of the club.  They won their league each of their first 3 years and are now in the Northern Premier League's Premier Division.  They've been there the last 2+ years and this year is the first time they've advanced to this point in the FA Cup. (Wikipedia)

Rochdale is a professional club that has spent most of it's history in the basement of professional football in the English pyramid.  Their claim to fame is their 1962 trip to the League Cup Final, where they lost to Norwich City...to this day, it's the only time a club from the bottom league division has reached the final of a major competition (Wikipedia).

Basically, FCUM comes into this game with a league record of 6-0-6 and sitting in 15th place in the table, 12 points back of the leader, FC Halifax town.  Their last match was a 2-1 win over Colwyn Bay in the second qualifying round of the FA Trophy.

Rochdale, who is in League One (two levels above FCUM in the pyramid) currently has a league record of 3-2-2 and are in 13th place in their table, 15 points behind Brighton.  Tuesday night, their derby against Oldham went six minutes before being called due to adverse weather and a waterlogged pitch.  Last Saturday, they lost to Leyton Orient 2-1, in a match that saw Leyton have 2/3rds of the possession.

I'm not even going to attempt to analyze either club or get too deep into anything...if you're reading this, you now know just about as much about these two squads as I do.  I would think there's a pretty wide gap in talent between a semi-pro team that's nearly brand new and a fully professional club that's been around for over a century.