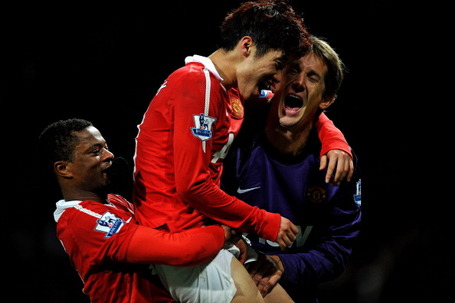 The above picture wasn't from Monday night, but from a couple months ago...still...Ji-Sung Park and his crazy side-of-the-head goal were the difference against the Gunners, putting United 2 points clear of Arsenal and Manchester City, with a game in hand.

"The game-plan was to stifle the midfield and to make sure we got possession of the ball in there. We did that well in the first half. We played very well and maybe we should have been further in front.

"In fairness, with the goal we did score, we deserved that. In the second half we had some great opportunities on the counter-attack, we were disappointed [not to make more of that]. Arsenal had more of the game in the second half without actually making many chances." -Sir Alex Ferguson ( ManUtd.com )

MORE AFTER THE JUMP: