What a time to start a blog. Manchester United are on course to perhaps win the Premier League, Champions League and Carling Cup. All while a battle rages between supporter groups and the Glazer family over the club's mountain of debt (the most remarkable part of all of this is that Nani is actually playing well.. It's an exciting time--for better or for worse--to support the world's greatest football club.

But you're not here for a recap of the club's history or internal politics (check out Jim White's excellent Manchester United: A Biography if you are). It's all about what's going on now. Louis Saha did his old teammates a favor by scoring two to beat Chelsea, and Arsenal won their relegation battle (well, almost) against Liverpool.

Hit the jump for a match report of our gutsy performance at Villa Park. 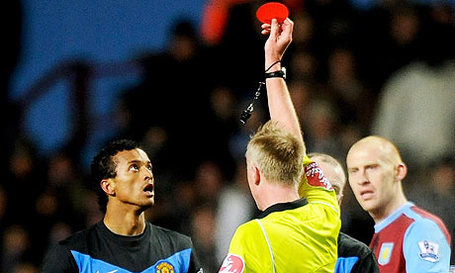 A draw is not normally cause for celebration. But anybody who saw the manner in which United cut Chelsea's lead to one point will understand why Sir Alex Ferguson was proud of his players. Aston Villa took the lead early on when Carlos Cuellar headed the ball into the top corner after a goalmouth scramble. The away side responded quickly when Nani's superb cross was hammered into the six-yard box by Ryan Giggs, where James Collins could only turn it into his own net. Nani was again in the action at the half-hour mark when he was sent off for a two-footed lunge on Stiliyan Petrov.

United held on until halftime and then came out a different side. Valencia came on for Scholes and United pressed Villa into submission. Wayne Rooney put in another virtuoso display and was nearly rewarded with a goal for his efforts. But fatigue started to take its toll, and the champions had to settle for a draw.

First of all, the red card was the correct decision. Sir Alex admitted as much when he said "It was a naive tackle, he's not a malicious player but nontheless it left the referee with no option." You hate to see someone sent off for getting the ball, but those types of lunges break legs. Just ask Eduardo (too soon?). What i disagree with is how lenient Peter Walton was for the rest of the match. There were several tackles--by both sides--that were definitely deserving of bookings. We only ask for consistency.

I was very happy with the team's overall performance, I thought  Villa might continue to hurt us down the flanks but we made the necessary adjustments to keep Young and Downing in check. I have no doubt we would have won the game with eleven men. Rooney was superb again, and we actually made up ground on Chelsea. Player Ratings below.

Had no chance on the goal, dealt with crosses well.

I thought young Rafael was great today. He shut out Downing and still had enough energy to bomb forward and whip in crosses.

Refused to give Agbonlahor a yard--even if that meant fouling him repeatedly.

Won several crucial headers and was generally solid. Only mistake was picking up a silly booking for tugging at Petrov's shirt.

Couldn't be his normal attacking self after Nani was sent off. Struggled with Young early but then reasserted his dominance.

Didn't have a great an effect as Sir Alex might have hoped, and was sacrificed for Valencia at halftime.

Was never flustered by Villa's constant pressure, and hammered a superb volley at Friedel in the first-half.

Darren was his usual energetic self, contributing on both offense and defense.

Has to get a low rating because of the red, but played quite well beforehand.

It's not east playing with ten, but when your lone striker counts as two it gives you a chance. Forced Friedel into a superb save with a curler as a striker, and then switched back to his left back/wing/forward postion when Berba came on.

Generally good, but dwelled on the ball occasionally. Was always willing to look for Rooney in space.

Changed the game and injected some much-needed pace. Had Luke Young dancing to his tune for much of the second half.

Had a few deft flicks and touches, but didn't hold the ball up well enough.