Manchester United secured a historic win at the San Siro in an enthralling Champions League tie. Ronaldinho's deflected volley wrong-footed Edwin Van der Sar to give the Rossoneri an early lead as Milan dominated the early going, before Paul Scholes scuffed home an equalizer. Wayne Rooney then scored two superb second-half headers as United took control of the tie, only to see Clarence Seedorf knock in an a backheel to give the Italian side a glimmer of hope.

Hit the jump for highlights, analysis, and player ratings. 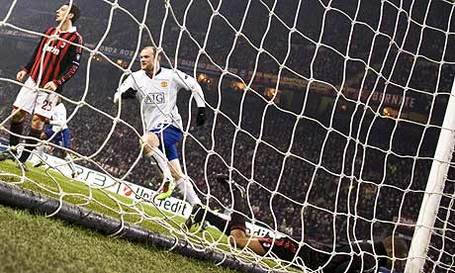 Now that was a roller coaster ride. We beat Milan at the San Siro for the first time ever, and the match lived up to all the hype. Of course I'm satisfied with a lead (not to mention three away goals) to take back to Old Trafford, and this was a mature, resilient performance. But you have to worry about the fact that the same weaknesses continue to pop up. Milan could have easily had two or three goals in the first twenty minutes, and the defensive communication was terrible. Scholes looked like a slow thirty-five year old at times, and the criticism that United are a one-man team (yes, it's Rooney) is starting to look a little bit more accurate.

But maybe I've just been spoiled by this current United squad. Winning in Milan is nothing to sneeze at, Madrid struggled on the road in Lyon today. I fully expect us to advance to the next round, and as long as that boy called Wayne stays healthy I'm not sure who can beat us. The second leg is not until March 10th--hopefully winning the Carling Cup will help to pass the time.

And before the ratings, I'd like to devote an entire paragraph to Milan. First of all, Ronaldinho is still a great player. He's not the world's best anymore, but his attempted flick in the box that hit Rafael's arm is an example of his unique ability to produce magic in tight spaces. Pato is the same, just a bit faster and weaker technically. Well, that and the fact that he doesn't party every night. Beckham is a good player too, he has somehow gone from vastly overrated to underrated. His free-kicks (crossing) are peerless. But in general, this Milan team is just too old. I'm not making a joke, it's just true. Seedorf (who really impressed tonight), Gattuso, Ambrosini and Pirlo are expected to be the heart and soul of a Champions League-winning-team. Seriously? Well, that's enough for now. Oh, and Stoke City were robbed today by Alan Wiley.

His save on Pirlo's swerving free-kick was superb, and his block on Ronaldinho's low effort may have been better. Wasn't at fault for either goal.

Ronaldinho was toying with him early on, but Rafa buckled down and played much better as the match wore on--until he lost the ball going forwards and was left woefully out of position for Milan's second.

Rio was winning most of the aerial battles, and kept Klass-Jan "The Hunter" Huntelaar quiet. Was lucky not to be called for tripping Ronaldinho after one of Scholes' turnovers.

Sir Alex called him over during Luca Antonini's injury break and had a few words. More precisely, he said "Wake the fuck up." Jonny did not communicate enough and his distribution was even poor. To be fair he is only 22.

Overhead clearance was a bit wild and indirectly led to the first goal, but "Pat" kept Pato under wraps. And that's not easy.

The real Nani's back! Does anyone still remember the Arsenal match?

Darren was playing a more advanced role than usual, and he made the most of it. Crossed to Scholes for the first and found Rooney with a delightful ball for the third.

Sometimes Carrick is hesitant on the ball, but he has the natural passing ability to make the killer pass. Did well enough, but picked up a second yellow for time-wasting.

The goal was a fluke, but "The Ginger Prince" put on his usual show of long passing, powerful shots, and atrocious tackling. A few too many giveaways though.

Park was surprisingly playing in a central position for most of the match, but still managed to contribute on both sides of the ball.

He worked on his header's all summer--and it shows. Wanted to rip Nani's head off, but overcame his frustration to show just how good he is.

Took him about 30 seconds to show Nani how to cross. Favalli knew he was going to the right every time and just couldn't stop him.