Vidic and Victory--for the reserves

Share All sharing options for: Vidic and Victory--for the reserves 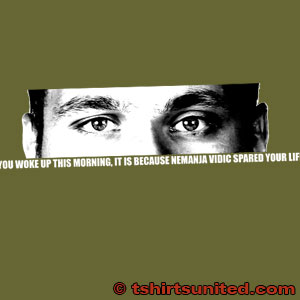 United face a tough trip tomorrow morning to Goodison Park, where they will meet an in-form Everton side fresh off a victory over Chelsea. Everton had a rocky start to the season, but have picked up form recently and are a good bet to make it to the latter stages of the UEFA Cup (or whatever it's called these days).

A bit lower down in the news was the reserves 2-0 victory over Everton at Moss Lane. Ole Gunnar Solksjaer's men are in many ways the future of the club, and I thought it would be nice to give them some attention. Highlights and more after the jump.

The big news from tomorrow's clash is of course, that Nemanja Vidic is finally fit. He has been injured and countless rumors have been popping up that he wants to leave Manchester for Spain (which he has since refuted, but I still expect him to leave in the summer). Sir Alex was none too happy that Vidic took himself out of the running for the Milan game, and tomorrow is a big oppurtunity for him to show us why he is regarded as one of the best defenders in the world. Nani is still suspended, and Sir Alex has confirmed that Valencia will start. Expect Brown to take Evan's place alongside Vidic in the absence of Rio. On the Everton side injuries are the issue again. Arteta and Rodwell are back, but Cahill and Fellaini are gone. This is good news because Cahill is a real goal threat, and Fellaini is closer to a butcher than a midfielder.

Yesterday's reserve win was interesting in part because of how many senior players were involved. Anderson has recently fallen from grace but he ran the midfield, and Mame Biram Diouf got the first goal. Obertan, Fabio, De Laet, Foster, and Rodrigo Possebon also started. There is some exciting talent in that team, and maybe this performance will get Anderson back into the first team reckoning.

Did you enjoy the interview with David Gill after the match? Diouf and Stewart's goals were both taken very well by the way.