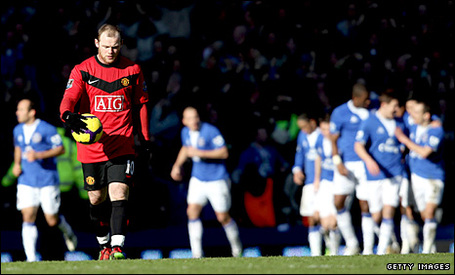 For a moment after the match, I honestly started to worry that we weren't good enough to win the league. Then I took into account the circumstances of our loss. For one, Goodison park was a madhouse. Everton had just beaten Chelsea, and the return of Mikel Arteta has further energized the crowd. And Sir Alex admitted that fatigue played a big factor. And finally, Everton are a very, very good team. They started the season miserably, but the combination of Saha being fully fit (we all remember what that was like) and new signings Landon Donovan and Diniyar "Billy" Bilyaletdinov on the wings mean that they are a force to be reckoned with. Chelsea found that out last weekend, and our tired squad played OK-but didn't have enough. So you know what, I am making excuses. Let's beat West Ham on Tuesday. Player Ratings and highlights in the full story.

I didn't realize it on the first viewing, but Bilyaletdinov's goal is a serious contender for goal of the season. He took it early and hammered a knuckler into the bottom corner before Edwin could move. All in all a decent performance from the dutchman.

Struggled with Donovan (aka Captain America's) pace, but made up for it with some superb crosses.

Battled "King Louis" (it's from the jungle book, I'm hoping that nickname will catch on)Saha physically, and made some good blocks.

Another tough game for Jonny, his positioning is still somewhat suspect.

Another quiet game in terms of his overlapping runs, Pat is in a bad patch of form at the moment. Part of it must be that we don't have a experienced replacement to give him a rest.

Another good game, his direct running and low crosses lead to some great chances (and a goal.) Not sure if taking him off for "the invisible man" Michael Owen was a good idea.

Carrick seemed a bit tired, his passing wasn't as crisp as usual.

Not the masterclass he put on in the San Siro, but a good performance.

No mistakes, but nothing spectacular either. Hauled off for Obertan.

Apparently he is human. Rooney's touch was heavy (overexcited to be back home?) and shooting wayward.

I'll say it again, his first touch is perfect. Perfect. Was the best of the attack in the first half, and set up Rooney with a delightful scoop pass that nearly led to a goal.

Used his pace well, but wasted a great chance by taking a heavy touch. Still excited to see what he can do with 90 minutes though.

So that's it. Before I sign off though, a special mention for Jack Rodwell. He is a rumored United target, and showed why today. England have a crop of youngsters at the moment--Wilshere, Rodwell, Johnson, Hart--that could be well be starting by Euro 2012 (if not sooner). Rodwell is one that could be on his way to Manchester this summer as we look to freshen up the midfield. Miguel Veloso is another possibility. Thanks for reading, and you may have noticed that I omitted the match report from this post. I assume you all watched the match/highlights, but if a wrap-up is helpful I'll continue to do it.