Wayne Rooney took his goal tally to 27 for the season as Manchester United saw off West Ham to move to within a point of Premier League leaders Chelsea. The in-form frontman opened the scoring with a firm header from Antonio Valencia's excellent volleyed cross. And another Valencia cross was headed home by Rooney for the hosts' second, before substitute Michael Owen clipped a late third from Paul Scholes's pass. West Ham battled bravely, but fell away in the face of Rooney's brilliance. (from the BBC) 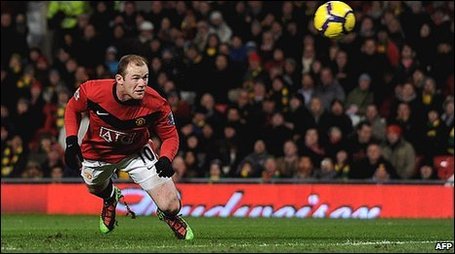 Where would we be without him? Wayne Rooney is so good that... well, you don't need me to tell you. I'll just say that I never want to see the day when Rooney is injured. In general though, I was satisfied with the match. This was a much-changed side, and the rotation players like Gibson and Foster stepped in quite nicely. Sir Alex's risky team selections rarely come back to haunt him (a notable exception being last year's FA Cup semi against Everton), and now we can head into Sunday's Cup final with a rested Fletcher, Carrick, and Van der Sar. One man who will miss the Final is Rio Ferdinand, as he has picked up yet another back injury. Well, Chelsea are about to kick off against Inter, so I'm going to rush ahead to the ratings.

Nearly let in an embarassing goal on Diamanti's deflected looping effort, but overcome some distribution mistakes to put in a solid performance. Best save came in the second half, again on the Italian Diamanti.

Wes plays much better alongside either Ferdinand or Vidic. Was strong in the air throughout.

An experienced and classy performance in his return. Even went on a mazy dribbling run at one point.

Evra played more like a winger than a left-back (in a good way), and you can see why he used to be a striker. And this is a total non sequitur, but Patrice is one of 26 siblings.

His final ball continues to improve, and his crossing resulted in both Rooney goals. Could be a world class winger in a year or two.

Did not look out of place at all, and used his cannon of a right boot to good effect.

One of Scholes' best (and most youthful) performances this year. Passing was perfect. The only black mark was the time he blasted over what could have been his 100th league goal.

It took him a month to get out of Sir Alex's doghouse...and he twisted his knee. Looked bright though.

Another good showing from the Bulgarian, Sir Alex will be more hesitant to leave him of the bigger matches if he keeps this up. Got Valencia the ball in the build-up to the two Rooney goals.

The goals were what you expect from somebody who is no longer just a scorer of spectacular goals, but a spectacular goalscorer. Almost had the goal of the season when he flicked it up and hit a dipping volley just over the bar.

Played very well, looked at home both covering for Evra and playing behind the strikers.

It seems like he's scored from that exact spot before...