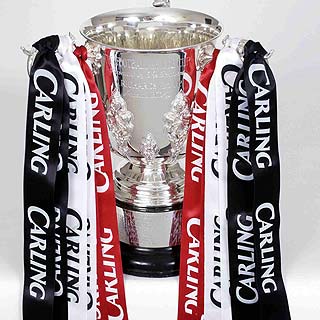 As you all know, we face Aston Villa tomorrow at Wembley with a chance to pick up the season's first trophy. This is obviously a massive match, but after reading some of Sir Alex's comments today he seems to be considering resting some of the big guns. Rooney may not start, and I suppose I can see why Sir Alex wants to give him a break before the run-in. But I'm going to disagree. I'm all for starting the younger players in the first few rounds against the likes of Barnsley and Wolves, but a final is a final. Our young players do have the ability to get the job done, but as we saw in last year's FA Cup semifinal defeat to Everton, if anything goes wrong you can be throwing a trophy away. Winning the  Cup would be a reward in of itself, and I think a defeat could hurt our confidence and derail our title challenge. The Cup Final is not a time for rest.

In the Premier League today there were some very interesting matches, with Chelsea's defeat to City being the most important. The gap is now down to just one point. But the day was marred by this horrific injury (warning:some disturbing images) to Aaron Ramsey in the second half of Arsenal's win against Stoke. No matter who he plays for, you never want to see something like that happen to a talented young man. Shawcross (about whom there are rumors of a return to United) looked distraught afterwards, and i don't think there was any malice in the challenge. More somber news this week is that Anderson is out for the season. Check back tomorrow morning, I'll try to have the starting XI's up before kickoff.