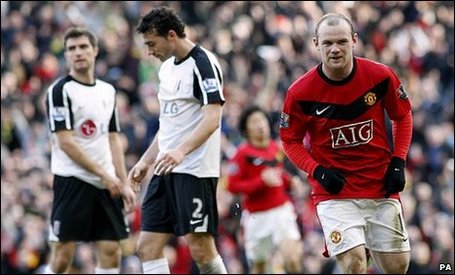 First of all, I apologize for the lack of a post this week. I was extremely ill and as the site is so new there is nobody to fill in for me. Anyway this was a great week, with the dominant victory over Milan and then three more points against Fulham. I'll put up highlights, but it's too late for a full match report. This Sunday is the huge matchup with Liverpool (who are currently beating Portsmouth at home--quite a big deal for them), and The Busby Babe will be back this week with a full preview, recap, and starting XI's.

One last thing, we all know that Rooney's form means United are favorites for the title, but it also has big ramifications for England. The big striking question is usually who to start--Heskey or Defoe? Well the answer is neither. Wayne has shown that he thrives as a lone striker, and England could clog the midfield by playing Barry/Hargreaves/Carrick with Gerrard and Lampard in front of them, along with two wide players supporting them. This seems to be the answer to stopping teams like Spain without sacrificing any offense. Thanks for reading everyone.