Cup Champions Again--and are the Red Knights riding to the rescue?

Share All sharing options for: Cup Champions Again--and are the Red Knights riding to the rescue? 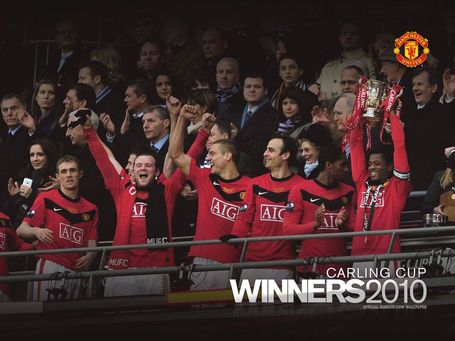 Carling Cup Champions. Again. It isn't as prestigious a tournament as the Premier League or even the FA Cup, but it's still fantastic all the same to pick up the first trophy of the season. However it's not often that the biggest news of the week isn't winning a trophy. A group of financiers (and fans) who have dubbed themselves "the Red Knights" held a meeting to discuss a possible takeover. This is something that we all think about much less than things like Nani's form, but an ownership change could be a huge boost to the club.

Player Ratings, highlights, and more after the jump.

Showed off his great reflexes to deny Milner. His distribution looks to be improving too.

Although he left Vidic a bit unprotected in the lead-up to the penalty, his positional sense was generally strong until he was forced off by an injury.

I have no idea how Nemanja managed to avoid being sent off--or even getting a caution. He was clearly the last man and denied a goalscoring opportunity. He can't be at fault for failing to match Agbonlahor's pace, but there was too much chaos in defence to give him a high rating.

The Ulsterman didn't look as flustered as he did in Milan, and picked up some vital big-game experience.

Evra lifted a trophy as Man United's captain. For those of us who saw his debut against City a few years back it is hard to believe how much progress he has made.

Excellent again. He is no Ronaldo, but I am sure that Valencia already has more assists than "CR7" had last season.

A big game performance from a big-game player.

Looked like he had the wrong boots on in the first-half. Steadily improved though.

I liked how direct Park was, his movement was excellent. Nearly put the game to bed when he struck the post in the first-half.

A great finish was followed by... an injury. And with Capello watching...

Berba brought his usual fantastic passing, but it was his work-rate that forced Dunne into conceding the first goal.

Didn't let Young take advantage of his speed advantage. This may be his last year at Old Trafford though.

The main transfer rumor is the week is about Angel Di Maria coming to Manchester. Apparently our scouts saw his hat trick in Benfica's recent 4-0 win over Leixoes.