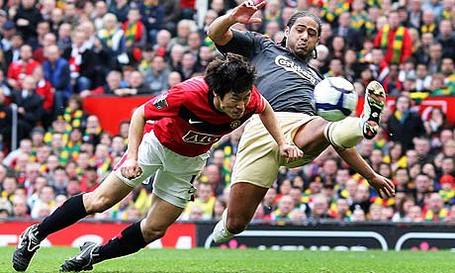 Manchester United came from behind at Old Trafford to beat Liverpool and return to the top of the Premier League. Fernando Torres opened the scoring after just five minutes, but United equalized when Wayne Rooney converted from the spot after Javier Mascherano hauled down Antonio Valencia. Liverpool attempted to hold on to a point in the second half but Park Ji-Sung capped an excellent performance with a brave diving header to secure the win.  More after the jump.

Well, we did it. As many jokes as you can make about Liverpool this season, they were one of the main obstacles between us and a fourth straight title. The way in which we won shows how the team has evolved from last season. Last year we often used up to three forwards (Rooney, Ronaldo, and Berbatov/Tevez). Rooney's evolution has allowed the focus to shift to midfield, where Fletcher and Park dominated Lucas and Mascherano completely. Although the approach seems more defensive, we have already scored more league goals than last term.

There were also positives in the defence. Neville and Ferdinand gave Torres the freedom of Manchester as he headed in the opener, but after that the Spaniard was reduced to bickering with teammates and complaining about Neville's antics. Liverpool (and even Gerrard cannot escape blameless) created nothing. Nothing.

It's hard to know what else to say about the victory, other than we deserved it. Chelsea's draw against Blackburn shows that the Champions League exit affected their league form more than I though, and we have to be odds-on favorites now to win the league.

PS. Someone please tell Benitez to shut up.

Another solid game, kicking under pressure was faultless.

What can you say, the man hates Scousers. Especially when they mess with his pool. A solid perfomance.

Didn't mark Torres well for the goal, but his pace looks to be coming back and he had a strong second half.

Nemanja can finally stop having nightmares about Torres (see last season's 4-1 at Old Trafford). Was dominant at the back and showed his dominance with several towering header's over the Spaniard.

Was a constant threat on offense, and helped pin back Glen Johnson.

Not as effective as the rest of the midfield, but kept play moving from side to side.

Put in the perfect cross for Park (after Neville's intelligent overlap) in the second half, and his stamina and commitment are never in question.

Made Insua look like a drunken fool time and time again, and Maxi Rodriguez's refusal to track back didn't help matters. Won the penalty with his athleticism.

Won some free-kicks on Johnson, but wasn't involved nearly as much as Valencia.

People used to say that Park was only at Old Trafford to sell t-shirts. How wrong they were. Park was a thorn in Liverpool's side and was rewarded for his efforts with a goal.

Only one goal for the world's second best player. Held the ball up well.

Good to see Sir Ryan back out there.