From Bolton to Bayern

Share All sharing options for: From Bolton to Bayern 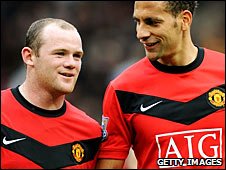 As I was out of town and couldn't post over the weekend, this post has kind of morphed from a Bolton wrap-up to a Bayern preview. Rooney and Rio sat out against Bolton with minor foot and groin injuries respectively, but both England stars have been passed for the massive clash at the Allianz Arena. The main injury news for Bayern is that Arjen "The Glass Man" Robben is a serious doubt. Robben and Ribery (along with the youngster Thomas Muller, who I saw at the weekend and was excellent) are obviously Bayern's main offensive weapons. Ribery is a bit of a question mark for me, for all we hear about him being worth 50 million pounds I haven't really seen him dominate a match. Anyway, we do have a bit of history with the German giants, and the game should be a thriller.

Hit the jump for Bolton highlights and ratings.

This weekend's Premier league action--apart from Kevin Phillips' late equalizer against Arsenal--turned into a goal difference battle between United and Chelsea. Chelsea (and Fat Frank in particular) were very impressive in their 7-1 mauling of Villa, but we closed the goal difference to just 2-0 with an excellent attacking display against Owen Coyle's Bolton. The match in general was pretty lopsided, Coyle must still be trying to explain how to pass through the midfield while removing the Sam Allardyce style from the squad.

Pulled off two wonderful saves, the one on Muamba was particularly impressive.

Got on with his job. Hope he comes back next year, if only for his experience.

A nine is incredibly high for a centre-back, but Vidic was spectacular. Sir Alex called his display "the best I've seen from a centre-back in years." Vidic was unbeatable in the air and the FA's threat of action over a loose forearm that struck Elmander is a joke.

Filled in ably for Rio, looked fit and mopped up behind Vidic.

Shut down Chung-Yong Lee, who is actually quite a good player. Contributed on offense as usual.

Another great performance, his driving run and shot led to Berbatov's first goal.

Long passing was impeccable as usual, Bolton gave him way too much time on the ball.

Played quite well, but Berbatov is nowhere near as effective a poacher as Rooney, and this made Valencia's crosses less effective.

Started slowly but ended up with two assists (one to Jloyd Samuel). Bolton didn't know what to do when he dropped in the hole and his passing was imaginative.

And that's why he got a new contract. Poor Sam Ricketts.

I lamented the fact that he doesn't poach like Wayne Rooney, but then again who does. Scored two important goals and the second one was actually a much more difficult finish than you may realize.

Macheda- Good to see Kiko back, looked a bit overeager to score but showed off his physical attributes(not in that way).

His goal was a fantastic finish, the ball was behind and he still hit it hard and low with the inside of his foot. Also hit a great crossfield ball to Valencia.