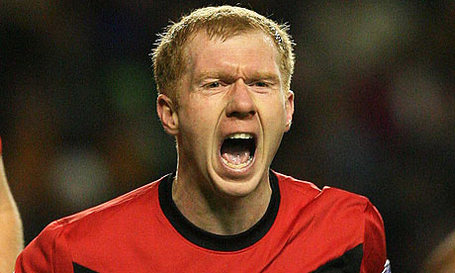 Manchester United went back to the top of the Premier League with 1-0 victory over Wolves. Paul Scholes finally broke the home side down when he burst into the box and slid past Marcus Hahnemann for his 100th Premier league goal.

Well, maybe some of the players were--like me--looking ahead to Wednesday's matchup with Milan. This was an entirely forgettable match, with the shining moment being Scholes reaching the century mark for Premier League goals. He is one of the best midfielders of his generation, and it's almost impossible to find someone that has a bad word to say about him.

Even though this wasn't a great performance, they always say that these are the type of matches champions win. Liverpool's insipid showing at the DW stadium yesterday--which was hilarious to watch--shows what can happen when you aren't ready to play. One of the main storylines heading into the match was Wayne Rooney's injury that he aggravated playing for England. Ferguson blamed Rooney for not taking himself off, but I disagree. I think it's up to the trainers and the coaching staff to regulate a player, the player's job is to play. Of course Rooney wants to start for England. International friendlies cause a lot of headaches, but if we want to see a high level of play at the World Cup we need to accept that things like this will happen.

Was mostly a spectator as nobody but Kevin Doyle provided any kind of threat.

Used his athleticism to good effect down the right before a foot injury forced him off.

Let Doyle turn and run a few times, but in general did enough to stop him.

Dominated in the air.

Looked better than in recent weeks, but I still think the Frenchman could use a rest. The problem is that every match from here on in so crucial.

His first season at Old Trafford has been exactly what we hoped for. He will never be Ronaldo, but I am willing to bet he has already created more goals from crosses than Cristiano did all of last season. The width he provides gives the team a different look, and he is part of the reason why Wayne Rooney has become such a goalpoacher (all 28 goals from inside the box).

Strong opening but faded away until he was subbed for Diouf.

Was rarely troubled by the harrying of Karl Henry, and looked like the Scholes of old when he burst into the box for the winner.

The man is a metronome. Never keeps it too long, and is the base for many of our attacks. The outrageous red card he was shown in Milan will hurt us the second leg.

Was willing to track back for once, but took too long to make decisions on offense. His form is really slipping.

Dimitar was excellent in dropping deep to get the ball and setting up teammates--but the thing is, that's not what a lone striker has to do. He needs to be making runs off the last defender and looking to score goals. All in all it was still a good performance.

Improved vastly on Nani's showing. Is a definite starter for tomorrow's match.

Missed several easy chances, but his pace and strength are a good base for a Premier League striker. It will take him time to adjust.