Is the season over?

Share All sharing options for: Is the season over? 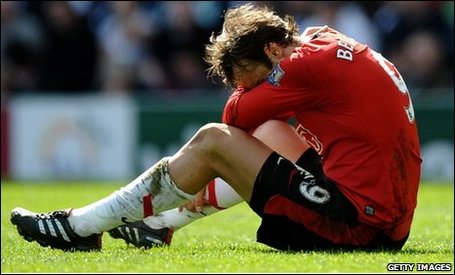 What a disaster of a match. As I watched the 0-0 draw with Blackburn I wondered where we would finish if Rooney was injured for an entire season. We dominated possession as usual, but the only real chance fell to Valencia and Paul Robison (who surely should be in contention for the England job if David James is) foiled him with a great save. I hate to say that the season is over, but it looks very likely that Chelsea will walk away with the title. At least Arsenal confirmed my belief that they were never going to win the league with a loss to Spurs. This all sets up a very interesting derby tomorrow at lunchtime. City are on fire right now, last week they made Burnley look like a bunch of Championship players who were out of their depth (Wait a minute...). Seriously though, City will provide a very stern test even if Rooney does recover in time to play as expected. Rio and Giggs are doubtful with muscle strains. Let's see, what else... Paul Scholes has extended his contract for another year--but please Sir Alex, sign a midfielder anyway--and Ferguson shot down the ridiculous rumor that Rooney is headed to Madrid.