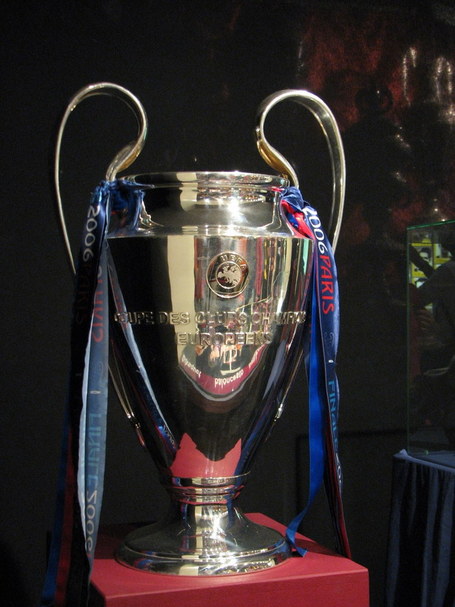 Well, the reason the picture is of the Champions League trophy is because... I'm bitter. And while Chelsea may now be favorites to win the league at least we still have a great chance to win that beautiful thing. Also I've decided to start doing the player ratings first, because they often cover much of the general match analysis. So, um click the jump.

I can't really blame him for either goal. Although he seemed to be leaning too far towards the far post for the second, allowing Drogba to find a space in the top corner.

Neville-4.5
I think Gary has done really well to force his way back into the side, and as a captain he brings so much to Manchester United football club. But the last two performances against Ribery and Malouda (who has really improved in the last 12 months) show that Rafael needs to be given a chance again.

Rio played quite well, and is definitely back to his usual dominant self.

Had one shaky sequence when failed to clear and nearly gave Chelsea a goal, but settled down and his distribution improved.

Looked like the fabulous player that he really is after a few tough games.

For the first in a while, Scholesy looked old. He couldn't get involved and was perhaps lucky not to pick up two (or three) yellow cards.

Had to cover for Scholes and do some of Giggs' running, he was the only "true" central midfielder on the park (Scholes was playing a holding role and was too slow anyway) and struggled to give us the grip on the game that we needed.

Played some nice passes, but nothing magical.

Didn't link up well enough with Berbatov. It makes sense to play Park against the likes of Pirlo, but Obi Mikel is a destroyer not a creator and Nani would have been more effective. Also, I think that he had a very strong penalty claim. Zhirkov clearly kicked his leg in the box. Sure, he trailed his leg behind him looking for contact, but you can leave your leg wherever you want. It was a pen (Although Neville also fouled Anelka in the box, so let's call it even. Oh never mind, Drogba was clearly offside.)

Was isolated at times, but a fantastic bit of skill early on showed what he is capable of. Won his fair share of headers, but missed a few half chances to equalize.

Looked really up for the game, and is at home now as a United player. Set up Macheda's goal.

The kid has no fear. Scored a crucial goal with his CHEST and will be have to keep it up until Rooney returns.

Yes, Drogba was offsides but Chelsea deserved the three points. Is the title race over? Not even close. Arsenal were written off a few weeks ago and look where they are now (actually forget it, they have no chance.) But seriously, Chelsea have to win at Anfield and even now that is no easy task. I was more focused on the Bayern game than the Chelsea one, going out of the Champions League with only Bayern and Lyon between us and the final would be a huge missed opportunity. It would be an honor to lose to Barca again. Some bad news is that Arjen Robben will be fit for Wednesday's match. See you tomorrow with a preview.

I'm also interested to know which lineup you would pick for the Bayern game. I'd like to see

Leaving out Park was tough, but we need the extra attacking thrust at home. Macheda could also give Bayern trouble if we went with two strikers, and playing him would give the Bayern backline less time to pick a pass.