There isn't much going on today in terms of Manchester United news as we get set for the final weekend of the season. As we all know United need a win on Sunday combined with a Chelsea draw or loss to Wigan in order for the title to remain at Old Trafford. It is a long shot but I know we will all be hoping for one last shock twist in the tail this season. The main story in the news today is that the Glazers have rejected bids for the club from groups in China and the Middle East and that they aren't prepared to sell the club even if an offer of 1.5 billion pounds is made official from any of the groups reportedly chasing the club. The Red Knights are apparently not discouraged by this news and will continue to put together a bid.

More after the jump.

I don't really want to get into my thoughts on the Glazers at this time but I have to say that if an offer comes in to buy the club that meets the Glazers' valuation then surely they need to sell. How can you continue to own a club where the fans want you out? The protests at Old Trafford aren't going away anytime soon and the Manchester United Supporters Trust, or MUST which I encourage you to join, is growing by the day. United fans don't want the Glazers. And they can clearly sell the club now and turn a massive profit. So why wouldn't the sell? Greed. They feel they can continue to run the club the way they have been and it will continue to rise in value. They may be right. But if Fergie goes and trophies stop coming as frequently as they have been the last 20 years then the value of the club won't rise the way it has since the Glazers purchased it. I long for the days when United wasn't burdened by debt. And I would love to see those days return and with them a more important role for the supporters in helping to manage and run the club. When the day arrives that United fans are the owners of the club I will be a happy man. 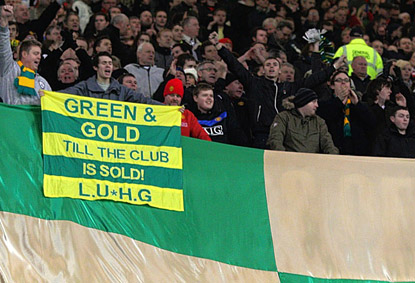 We are reportedly in the hunt for Stephen Ireland. Alan Shearer is an idiot, no surprise there.

And on Manutd.com there are interesting reads about Rooney, who is going to get even better apparently, and Sir Alex who sees positives from this season. Can Rooney get better? He certainly can which is frightening.