Manchester United manager Sir Alex Ferguson deployed his side in a 4-4-1-1 shape. David De Gea was in goal while Rio Ferdinand and Phil Jones were the center-back pairing. Patrice Evra wore the captain's armband at left-back while Fabio got the start at right-back. Michael Carrick and Darren Fletcher were the central-midfielders with the former generally playing deeper. Nani was the wide left player in attack while Antonio Valencia was the wide right player. Dimitar Berbatov was the lead striker while Ashley Young returned from injury to play to play in a withdrawn role.

Benfica manager Jorge Jesus fielded his side in a 4-1-3-1-1ish shape. Artur was the goalkeeper while captain Luisao and Ezequiel Garay were the center-back tandem. Emerson was at left-back and Maxi Pereira was the right-back. Javi Garcia shielded the defense in a strict holding role while Axel Witsel played in the center of the park in a more advanced role. Nicolas Gaitan played as the wide right midfielder while Bruno Cesar played quite narrowly as the wide left midfielder. Rodrigo was the striker and Pablo Aimar roamed freely in behind him. United looked very unsettled in the early going and Benfica's aggressive pressing to the start the match was a big reason for this. Rodrigo was selected up front over Oscar Cardozo and this perhaps was due to Jesus' intent to put United under pressure. The striker used his pace to work tirelessly in chasing down United's center-backs when they were on the ball, he was even joined by Aimar at times in closing down the other center-back. Aimar's pressure on a center-back was slightly surprising because a player in his position -- a hybrid between a withdrawn striker and a number ten -- typically picks up the deepest-lying midfielder. In addition, the Argentine struggles to make it a full 90 minutes these days so his pressing had an element of surprise to it due to his fitness.

On Benfica's opening goal in just the 3rd minute of the match, their pressure won them the ball back in United's half and from here, quick passing and interchanging movement allowed Gaitan to send in the pass for Jones' own goal. The own goal was unfortunate for United but Benfica's pressing and United's unpreparedness for it at this early stage of the match was the genesis of that goal.

At about 20 minutes into the match, it was becoming evident that United were growing into the match. The biggest reason for this was that the home side began to successfully find an out ball from Benfica's pressure. When Aimar would close down a center-back, the out ball was either to a full-back -- Evra or Fabio -- when their counterparts would come inside to congest the middle or the out ball was to the spare man Carrick when the Benfica wide players closed down the United full-backs. Fletcher and Witsel were pretty tight on each other. United's right-sided center-back, Jones, looked uncomfortable with the pressure in the early going and perhaps this is understandable (somewhat) when considering that he has recently been playing right-back for United and in the midfield for England. Carrick's passing statistics were impressive (88 passes completed at a 84% success rate | 13/17 on long balls) -- just as they were at Swansea City during the weekend -- but more importantly, his ability to receive and relieve pressure began to allow him to dictate the pattern of the game. He began to ignite the build up in attack.

The opening goal for United came in the 30th minute and this was a time when the momentum of the match was shifting towards the hosts. From here, the tempo picked up to a frenzied pace and Old Trafford became quite vociferous. Pressing at high intensity for 90 minutes is impossible and even for the fittest sides in the world, there will be moments when that side takes the foot off the pedal. Barcelona is a slight exception to this rule because their 70% possession or so in each match allows them to do less chasing. Carrick was pulling the strings as a deep-lying playmaker at this point in the match and Benfica chose this moment to relax with their pressing until halftime. Aimar adjusted and began to drop off and get goalside of Carrick.

United continued where they left off to begin the 2nd half. Carrick once again was igniting the attack from deep by either swinging the ball out wide or by supplying Young, the link player from midfield to attack (more on this later). Swinging the ball from flank to flank was very important in this match because Benfica's wide players, Gaitan and Cesar, were playing very narrow and when the ball was on one flank, the player on the on the opposite side often crossed over the middle portion of the pitch to provide cover and congestion in the middle. Therefore, Carrick's clean first-touch and vision allowed him to utilize his passing range and he often switched play in a quick fashion to the other flank. This resulted in 2 v 1 situations for United's full-back and winger versus Benfica's full-back. The second goal by United came with the run of play.

Moments later, Benfica equalised after a lapse in concentration by United. When left-sided center-back Garay had the ball, Emerson got in behind Valencia and surged down the touchline and received the ball in United's half. de Gea's poor clearance after a poor pass played back to him led to goal but the genesis of this was Emerson's marauding run in behind Valencia allowing for an overload down the left flank. Just eight minutes after the equaliser, Nemanja Matic was brought on for Gaitan while Witsel moved out wide to the right. Matic played much deeper than where Witsel was playing and it appeared that Jesus would be content with a 2-2 scoreline. The equaliser seemed to take the wind out of United's sail and Jesus introducing Matic was the first significant tactical adjustment by either manager.

When Young was signed this past summer, Fergie stated that he would mostly be used on the left flank as he adjusted himself to the club. The former Aston Villa attacker acclimated well and his standout performances on the left flank in the season's beginning was a big reason for United's impressive start to the season. Fergie surely had this in mind though when he signed the former Villa player -- value in his versatility.

Young mostly lined up behind a lead striker last season for Villa in their 4-4-1-1 shape. He was their creator in chief as he operated in the space between the lines and created goalscoring chances. For United, this is the space that Rooney typically occupies and United did not have another player on their squad last season that could create from the same area of the pitch. They had Berbatov who could come deep into this space as a false 9 or they had players like Ryan Giggs or Anderson that could provide driving runs forward with late-arriving runs into the box -- neither role is tactically similar. With the injury to his talisman, Fergie finally had an opportunity to see what Young could provide in this role.

The results were mixed. Benfica's Javi Garcia was excellent in the 1st half and he did well to stifle Young by essentially man-marking him out of the match in the early going. Garcia tangibly provided 4 tackles and 4 interceptions in the match. Young began to seek relief by coming deeper for the ball and looking to link with Carrick when deep-lying playmaker got into a rhythm. Credit should be given to Garcia for his effective marking but Young perhaps was rusty in this role as this was the first time he had played it this season with United. In addition, he may have lacked an understanding with his fellow attackers from this central role. Young improved as the match wore on but of his 41 passes completed, 23 were backwards and only 1 was deemed as effectively incisive (1 key pass). More is required of from a player in Young's role. 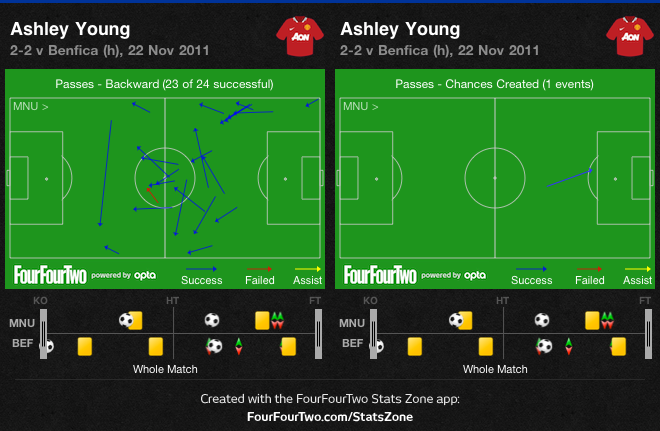 There is not too much to mention tactically with either player but I wanted to make a quick mention of each player's effectiveness in this match. When United struggled early, it was Nani that provided a few brilliant runs and this eventually forced his counterpart Pereira not surge forward as much as he had. Statistically, Nani had five 'successful dribbles' which simply means this -- yes, your eyes were not wrong if you felt Nani was weaving his way through Benfica's defenders. And your eyes were also not wrong if you felt he was giving the ball away too easily at times  -- he was dispossessed five times and had eight turnovers. Nani typically plays much better on the right flank in comparison to the left. It was good to see him provide so much incisiveness at times from the left flank.

Aimar's intelligent movement caused problems for United. Carrick, although not playing in a strict holding role, mostly did well to mark Aimar when Benfica were patiently building an attack. However, when Benfica won the ball back in dangerous areas and broke at speed, Aimar did well to find space behind Carrick. From here, United's center-backs were reluctant to come out high and mark him. There was one specific instance where Jones did do this and Benfica's quick, one-touch passing and fluid movement nearly created a dangerous threat in the space Jones had just left unoccupied. Aimar had a very good game and is typical these days, he ran out of gas late and Ruben Amorin was brought on for him.

Mention and explanation has already been provided for both of Benfica's substitutions. They did not park the bus after they equalised but their pressing game disappeared late and they appeared focused on keeping things tight and not leaving gaps for United to exploit in attack. United brought on Javier Hernandez (Chicharito) in the 80th and this resulted in United switching into a 4-4-2 shape. Young moved out wide to the left and Nani switched flanks in place of the departed Valencia.

It was United's most important European match thus far this season and using Young as a central playmaker for the first time this season was not ideal. However, with Rooney's injury and with Fergie likely anticipating the need for a link player between midfield and attack -- because of United's likely dominance of possession -- Young was deployed in this role. Jesus sprung a slight surprise by aggressively pressing United and this early shock resulted in an early mistake. United found a spare man behind Benfica's pressing attackers and used Carrick to bring them into the match. Their goals at the half hour mark and near the full hour were fully deserved and the Reds appeared to be on their way. An instant concentration lapse changed the complexion of the match and a 2-2 scoreline was the result. It has been a disappointing adventure for United thus far this season in Europe this and a result is now required in Switzerland if they are to qualify for the knockout stages. If that mission is accomplished, it will have to be without Carrick because he will be serving a suspension for yellow card accumulation.