I missed out on doing a few of these recently, but today I got a chance to ask a few questions for Robert Bishop of Coming Home Newcastle ahead of Tuesdays Premier League game between Newcastle United and Manchester United at St. James Park. Here's the link to the questions the community asked (which were pretty much what I wanted to ask him, too).  Be sure to check out the other half of the interview, where I answered some questions for Robert.

Is it worrying that 3 of your remaining games are against Chelsea, United, and Liverpool, and there’s only a margin of 1 win or so between 9th place and 15th or 16th in the league?

Well, I'm personally going to be worried until safety is mathematically guaranteed, but until then I'm taking solace in the fact that there are so many teams between Newcastle and the drop zone.  A lot of things would have to happen for the unthinkable to happen.  It's not a lofty goal, but I think gaining even one point from the three games mentioned would make a lot of people breathe easier.  Remember, this team beat Liverpool in league play and beat Chelsea in cup play earlier this season.  Those were admittedly very different circumstances in both cases, but the confidence factor will be there.  I'm feeling better about safety than I probably should be, especially given what happened two years ago, but at least this time we're looking down at teams instead of hoping for help from others.


What are the main goals at this point in the season for the team, given how things have gone so far? And what are the hopes for next year?  How do you rate the success of the team this season, and what are your expectations are for next season?

I lumped these questions together because they seemed to be asking the same thing.  Survival was always the sole goal of this season.  Anything else is just gravy, and though there was certainly some admittedly premature talk about Europe at one point this year, I'll be satisfied with 17th or higher.  Assuming that goal is reached, I of course expect the club to make progress next year.

Check out the rest of the Q&A after the jump:

Also, what would you ideally like to see the team do with the 35 million pounds they got for Andy Carroll?

Don't forget about the 8 to 15 million pounds from the reported sale of Jose Enrique Sanchez. (sobs silently) I don't want to get too specific, but what I don't want to see is a big signing that won't have much impact aside from trying to appease the fanbase.  There are multiple holes in this team and depth issues at virtually every position.  A few smart signings in the £5-10 million range plus some bargain-hunting would satisfy me.  Of course, we don't really know much at all about what kind of deal-maker Alan Pardew is, which leads me to the next question...

What are your thoughts on Chris Hughton's dismissal and of owner Mike Ashley?

We were huge Chris Hughton fans, as were most Newcastle supporters.  He 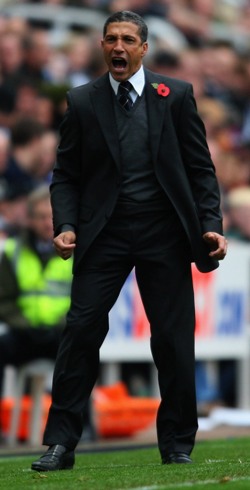 stuck with the team and led them out of the wilderness (Championship), all the while gaining the trust of the players.  He was great at working with Graham Carr (Chief Scout), too, and he was able to sign both Cheik Tiote and Hatem Ben Arfa on a very limited budget.  In the end, I believe that he suffered from the perception of being too timid, though as a biased observer I preferred to think of it as a quiet strength.  Alan Pardew has gained some measure of begrudging support from the Toon Army because he's achieved mixed results while working with nothing, but I'm slowly returning to the place where he frustrates me more than anything.

Mike Ashley is never going to be a popular figure on Tyneside, especially as he continues to insist on playing the ringmaster to Newcastle's circus.  Having said that, I think he's gained a little bit of traction on the back of the news that he's sunk almost £150 million into the club, interest free.  Relegation comes with a high financial cost, and to his credit, Ashley has kept the club afloat even as they continue to pay the consequences for that ugly mistake.  That probably won't keep me from singing along to "Get Out Of Our Club," but it will keep me from starting the refrain.

Do you expect Jose Enrique back for next season? The left-back really seems to have emerged as one of the better ones in the Premier League; what are your thoughts on his rumored move to Liverpool?

Well, part of me wants to hope that he'll come back, but given his recent comments that he "aspires to more," that's almost definitely a false hope.  I'd love for him to be part of the core that brings this club back to glory, rather than taking the easy way out and joining up with a club on the fringe, but if he doesn't want to be here, why make him miserable?  I do agree that he's one of the best left backs in the PL; I'll be sad when he goes.  Still, if Liverpool wants to pay too much for another one of our players, we'll take the money.

Joey Barton seems to be as mercurial as ever but he’s having another fine season. Do you think he’s deserving of a regular spot on the England squad?

Probably.  He's not England's #1 midfielder, as he recently claimed, but he has enjoyed a solid campaign...at least when he hasn't chosen to take the game off to whine at the referee for 90 minutes.

Newcastle seems to have really suffered after losing Andy Carroll. Do you think Ashley will spend the 35M they got for Carroll to upgrade the attack? Who are some of the rumored targets?

Well, he'd better.  Leon Best has emerged as the heir apparent to Carroll, though I think he would be suited as a #2, and he's out for the season now anyway.  It seems like there's a new rumor everyday, since everybody knows what Andy Carroll's transfer price was.  To be honest, none of the names mentioned really move the needle all that much for me, and I anticipate that we'll hear more substantive whispers as we get nearer to the open of the window.  Some of the more familiar names mentioned include Gervinho, Adriano, Carlton Cole, and Adel Taarabt.

Speaking of Carroll, how deep did it cutting losing the striker? My guess is that it had to hurt more since he’s from Tyneside and his emergence came in the Newcastle shirt.

Well, yes, it hurt.  Carroll was something of a folk hero and had all of us hoping for a bright future.  Now that future is tied up in the unknown, and that's nerve-wracking.  The club initially tried to save face by claiming that Carroll demanded out, but I think most saw through that as a PR stunt.  I still root for him, believe it or not.  The bottom line is that we all cheer for laundry, so if a club comes along and wants to pay twice market value for a player, I'm happy with it (assuming the money is reinvested).

I'm assuming that scattered reports of an injection in Steve Harper's knee are false and that Stephen Ireland's girlfriend (who was recently in a bad car wreck) will give him her blessing to make his Newcastle debut.  Captain Kevin Nolan is suspended.

I predict a close result, but I'm not brave enough to expect anything more than a loss.  Let's call it MUFC 1, NUFC 0.