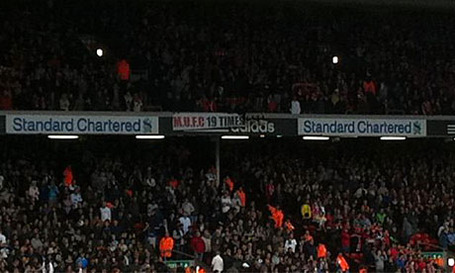 http://www.guardian.co.uk/football/2011/may/16/manchester-united-19-times-banner-anfield  You have to be impressed with the dedication as well as the preparation. These guys even had a getaway car waiting.

http://www.guardian.co.uk/football/blog/2011/may/16/sir-alex-ferguson-sheffield-united-fa-youth-cup  The big boys might not be the only squad to take home trophies this year. There are some quality players in the academy currently, too. Do yourself a favor and click here and here.

http://news.bbc.co.uk/sport2/hi/football/13387966.stm  Alex Ferguson gets away with just an FA warning for his Howard Webb compliments.

http://msn.foxsports.com/foxsoccer/eredivisie/story/Ajax-stopper-Stekelenburg-denies-Manchester-United-transfer-offer  It sounds like Maarten Stekelenburg is a good backup plan should United first choice keeper target not work out.

http://soccernet.espn.go.com/news/story/_/id/919057/nikica-jelavic-claims-manchester-united-interest?cc=5901   This was posted in the transfer discussion thread by Gene. If you haven’t browsed through that thread, please do. There are some good thoughts and ideas thrown around in there.

http://blogs.forbes.com/mikeozanian/2011/05/16/manchester-uniteds-third-quarter-results-show-glazers-using-cash-to-pay-down-debt/   Review of the 3rd quarter financials looks like the Glazers are making slow progress on the debt…….but progress nonetheless.

http://www.nfl.com/news/story/09000d5d81fda71b/article/appeals-court-grants-nfl-motion-for-stay-pending-appeal   Speaking of the Glazers, I realize it’s an NFL link but the cash flow this court decision gives the owners, with minimal current NFL-related overhead, can be nothing but good news for United.

http://espn.go.com/sports/soccer/blog/_/name/five_aside  Stats to back up what us fans knew all along..... this team knows how to win when the pressure's on.