By now, much has been said about the UEFA Champions League final and two general points of rhetoric seem to be emerging: (1) F.C Barcelona are amongst the greatest sides ever, if not the best. (2) Sir Alex Ferguson got his tactics wrong. Perhaps the first thought is true, I certainly won't argue against it. On the second thought, let's examine Manchester United's performance in the final and discuss the manager's tactics. This will be the first part of a close examination of the final; it'll begin by introducing each side's opening lineup, each side's shape, and United's bright start.

Fergie elected to use his recent first-choice side. In the 4-4-1-1 shape, Javier 'Chicharito' Hernandez played up top as the striker while Wayne Rooney played in a withdrawn role. Park Ji-sung was the wide left player while Antonio Valencia was the wide right player. Michael Carrick and Ryan Giggs formed a partnership in the center of the pitch, with the former generally deeper and the latter having more license to get forward. Fabio got the nod at right-back and Patrice Evra was the left-back. Rio Ferdinand and skipper Nemanja Vidic were the center-back tandem while Edwin van der Sar was making his final appearance in goal before retirement.

The bench is worth discussing for two reasons: (1) Much has been made about Dimitar Berbatov, the Premier League's co-leading goalscorer, not making the bench - perhaps the Bulgarian could have provided more tactical versatility than the chosen Michael Owen. (2) Three central midfielders were chosen for the bench (Paul Scholes, Anderson, and Darren Fletcher) while no full-back was chosen. Despite the possibility of Valencia, Fletcher, and Giggs filling in at full-back, once again Fergie limited his tactical options with the choosing of three central players.

Barcelona manager Pep Guardiola mainly choose his expected lineup, however, one surprise prior to kick-off was skipper Carlos Puyol on the bench as a substitute as he reportedly failed a fitness test the day before the final. This meant Javier Mascherano at center-back and Eric Abidal at left-back. Gerard Pique was the other center-back and Dani Alves was the right back. Barcelona's midfield trio consisted of Sergio Busquets, Xavi Hernandez, and Andres Iniesta. In the attack, Lionel Messi was generally positioned centrally but he had a free role. He was joined by David Villa on the right and Pedro Rodriguez on the left. Victor Valdes was in goal. Just as they had two years ago in Rome, United started off very brightly in the opening 10 minutes of the match. There seemed to be two basic points of emphasis for United in the early going: (1) make Barcelona uncomfortable by squeezing them with relentless pressure in their own half of the pitch and (2) to simply punt the ball long and bypass the midfield when Barcelona pressured them in their own half. Let's examine some still-images from the opening 10 minutes of the final: 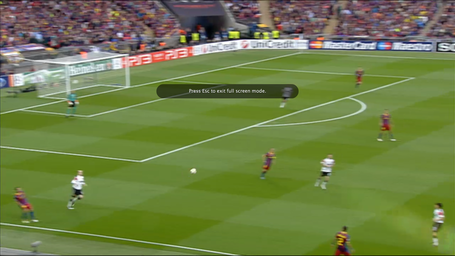 Photo 1: Here in the opening minutes, the center-backs split wide (Mascherano on the right touchline, Pique on the top left corner of the box) when Valdes receives the ball and Busquets (~ 10 yards in front of the box) drops deep to form Barcelona's 3-4-3 shape when they begin to build an attack. Chicharito presses Valdes before the goalkeeper plays the ball to Mascherano near the right touchline. Barcelona were a bit rattled in the opening moments of the match due to United's pressing. As a result, Xavi (~ 8 yards ahead of right corner of box) began to come very deep for the ball in an effort to help relieve pressure.

As Mascherano receives, Chicharito's pressure cuts off both Valdes and Pique. When Rooney closes in on the ball, Park has Alves marked while Giggs has aggressively moved high up the pitch to close down the deep-lying Xavi. 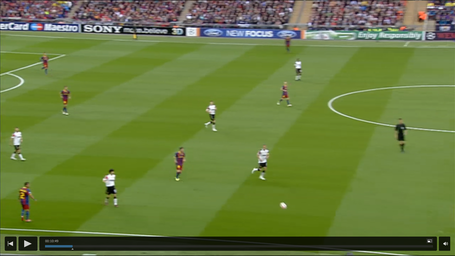 Photo 2: In this screenshot, just a moment after 'Photo 1', you can see that Carrick (center) has also come high up the pitch to close down the deep-lying Busquets (deep middle). While out of possession, Valencia (top of screen) has tucked in narrow to help out on Iniesta. From the attack, Messi (bottom-center of screen) has come very deep in his own half in an effort to help his side relieve the pressure from United's pressing. You can see United's aggressive intent by noting how high up the pitch that Vidic has come up in an effort to close down Messi. This is a concentrated team effort by United and their aggressive pressure in Barcelona's own half forces Mascherano to panic and to kick the ball of bounds for a United throw-in. 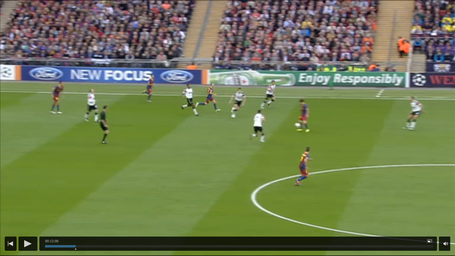 Photo 3: With United's pressing causing disrupton for Barcelona and the supply line for their attackers, Messi (on the ball) continues to come deep for the ball in an attempt to link play between the midfield and attack. With Carrick and Giggs pressing high up the pitch, space opens up in between United's midfield and defense - the space where Messi finds here. Ferdinand (right side of screen) is hesitant to move this high up the pitch knowing that this would drag himself out of position and open up space behind him for Villa and Pedro to run into. While United's aggressive pursuit in numbers and high energy are disrupting Barcelona deep in their own territory, a lack of a holding player, one that guards the space in between his side's midfield and defense, is beginning to get exposed by Messi. 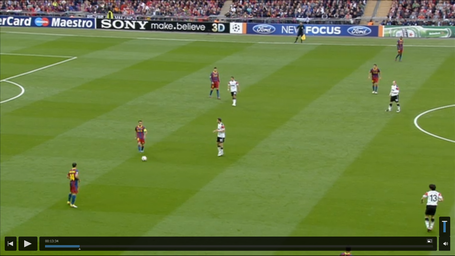 Photo 4: Just as Messi has looked to help his side by dropping deep, so to has Xavi (on the ball) in the opening minutes of the match -except that the midfield maestro is mimicking the role that Busquets usually plays; dropping deep in between his center-backs. Giggs (nearest Xavi in this photo) has obviously been asked to relentlessly press Xavi in the early stages of the match. In response, Xavi who is likely looking for more comfort in the avenue of more time on the ball, drags Giggs out of position with his deep movements -- whether intentional or not. 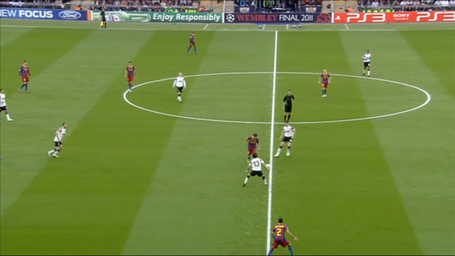 Photo 5: Moments later, Messi (on the ball) comes deep again to find the space behind Giggs  (~15 yards ahead of Messi on the left of the screen) with the Welshman pressing high up the pitch. Rooney (left-center of screen) is also unable to drop deeper into the midfield because he's occupying the deep-lying Busquets (left of Rooney). Xavi plays Messi into the open space and Carrick is left with the dilemma of having to deal with both Iniesta and Messi. The Argentine has enough time to turn when he receives and both Carrick and Park (#13) attempt to close him down. Alves (#2) is now open and Valencia (far-side of the pitich) is forced to come to the middle of the pitch from his wide right position to help out on Iniesta (in the center-circle). If Messi splits Carrick and Park here, United are in big trouble. 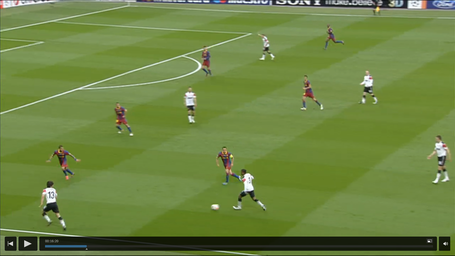 Photo 6: Here you can see United's fruits of labor; the pressing has resulted in United winning the ball back in a dangerous position and a result, they can attack with numbers as well. With Giggs' high-positioning, Abidal (far-side) is desperately attempting to recover in order to provide his side a spare man in the back. In the opening 10 minutes of this match, Xavi's deep positioning has essentially allowed his side two-holding midfielders, a resulting shape that is similar to the back two bands in a 4-2-3-1 (Barca's attack is not this though). United were the better side in the opening 10 minutes and their pressing created threatening moments, but they could not get the opening goal versus Barcelona due to wastefulness such as this particular attack. 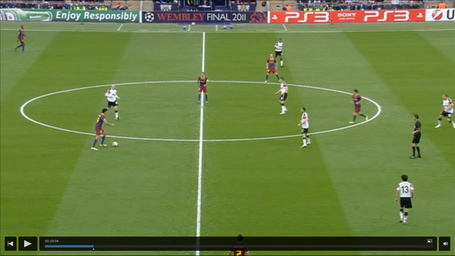 Photo 7: The effort that United put forth in the opening 10 minutes wasn't sustainable over a full 90. United began to back off with their pressing, specifically Giggs. Part of this was due to United picking and choosing when to press and some of this likely had to do with Messi's and Xavi's movement in between the lines allowing their side to settle into the match. With United beginning to back off a bit with their pressing, they began to sit deeper and defend with two flat lines of four at times - Here you can see the midfield band form a flat line. With the layering in vertical positioning and movement of Barcelona, which you can already see here in their basic shape - with Busquets deep, Xavi the link-player, Iniesta looking to join the attack, and Messi operating in between the lines, United were going to be in trouble.

Part 1 conclusion: The other point I wanted to emphasize, but with I couldn't do with any interesting snapshots, is that United simply bypassed their own midfield when they had the ball in their own half of the pitch. Ferdinand, Vidic, and van der Sar all simply punted the ball long for Chicharito to run onto - the Mexican striker was continually called off-sides with Barcelona's cohesive high-line in defense- all the more impressive when you consider that the back four (Mascherano, Pique, Abidal, and Alves) haven't spent much time together.

United did well to press and disrupt in the early going, and Fergie had a contingency plan for the likelihood of being overrun in the midfield by having Park and Valencia willing to work hard and cover in central positions. Perhaps Guardiola should have had his side better prepared for this tactic after United had the same positive start in Rome two years ago due to the same opening tactic. However, it's also quite possible that Guardiola instructed the intelligent movements of Xavi and Messi between the lines -- this is what eventually allowed Barcelona to get through Round 1 of this prize fight.

Part 2 to come in the next day or two.