In Part I of our tactical review of the UEFA Champions League final, it was discussed how Manchester United's bright start in the first 10 minutes of the match resulted from their aggressive pressing high up the pitch. In their own half of the pitch, United simply bypassed the midfield and punted the ball long in order to relieve pressure. This combination resulted in a rattled start for FC Barcelona as they were under siege and unable to consistently relieve pressure themselves. The Catalan side grew into the match when both Xavi Hernandez and Lionel Messi began to come deep in search of space between the lines; the former in between United's midfield and attack while the latter in between their defense and midfield.When Barcelona became settled and were able to build a consistent attack, they threatened United by simply overrunning them with a numerical advantage in the central midfield.

IGNITING THE ATTACK FROM DEEP While United were relentlessly pressing high up the pitch in the early stages of the final and causing trouble for Barcelona, much of that was because the Catalan side's midfielders and defenders were simply occupied. The high midfield pressing of Michael Carrick, and especially Ryan Giggs, occupied Andres Iniesta and and Xavi. Wayne Rooney was shuttling back and forth from pressuring Barcelona's center-backs and getting goal-side of Sergio Busquets. Park Ji-sung shuttled back and forth from his touchline to track Dani Alves while helping out on Xavi; while Antonio Valencia did the same on the opposite side of the pitch as he tracked Eric Abidal and tucked in to help out on Iniesta. United were squeezing their opponents and making them uncomfortable in their half of the pitch.

Xavi began to drop deeper into the midfield so that he could provide an outlet. Giggs was likely instructed to relentlessly press Xavi so the United midfielder simply tracked his counterpart higher up the pitch. As a result, space was opening up behind United's midfield, specifically in the space behind Giggs and Carrick. Messi began to roam into the open space behind the United midfield and the Argentine became a threat.

Due to Messi's adjustment by moving into this open space, and also because that United's aggressive pressing isn't sustainable over a full 90, Sir Alex Ferguson might have choose this as a good time to drop his midfielders back a bit. 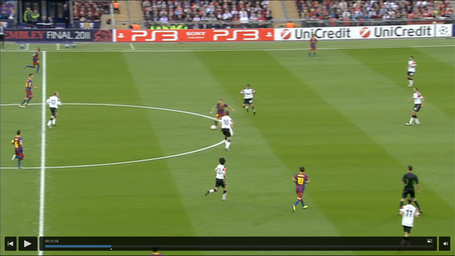 Photo 1: Here in this photo, you actually see Giggs (#11) and Park (#13) swap positions when United begin to ease the pressing from their midfielders. It may have been more prudent for Giggs to press high up the pitch in the early going - because if United won the ball back in a dangerous position there, the Welshman was a bigger attacking threat on the ball than Park. In addition, Fergie may have seen Park's defensive energy in the center as more useful than Giggs' if United were going to sit back and defend in their own half for a period of time. During the 1st half, this swapping occurred a few times.

Xavi (left-side of screen - #6) has remained deep and along with Busquets (upper-left-center of screen), both are holding and almost playing the role of double-pivots at this point in the match (17th minute). Because Park and Carrick are now dropped off, either Xavi or Busquets have time on the ball to ignite the attack from deep - Rooney can't occupy both. In this photo, you see Park tracking Messi (#10). 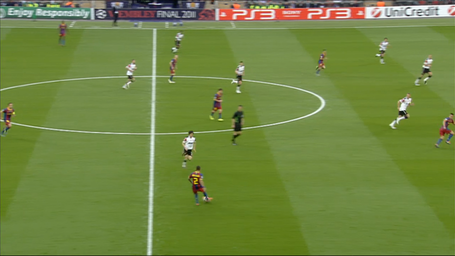 Photo 2: Here is a screenshot from just minutes before Barcelona's opening goal. With Park and Valencia often in a narrow-position, because of their assistance in defending Xavi and Iniesta in the center, Barcelona's two full-backs, Alves (#2) and Abidal, began to get forward into open space. This image shows Barcelona's basic positioning: Alves high up the pitch on the right touchline, Abidal high as well on the left touchline while essentially level with Xavi (left side of screen - captain's armband), Messi dropping deep into the midfield (center of the image), Villa and Pedro (right side of screen) in attack as forwards.

It was mentioned earlier how United did well to press and frustrate Barcelona; this was partly due to United being able to match the Catalan side numerically in the midfield when Rooney dropped deep to occupy Busquets - this changed when Messi dropped deep into space behind United's pressing midfielders and provided an outlet by being a spare man in the center. 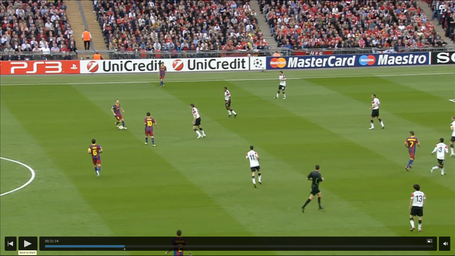 Photo 3: Here in the screenshot, you can see the 3 v 2 advantage that Barcelona has in the center of the pitch while in attack. Barcelona was completely dictating the match at this point (22nd minute). United were still sitting deep, as they had for about 11-12 minutes at this point. Higher up the pitch (from Barcelona's perspective) and in attack, the Catalan side troubled United when Messi dropped deep -- this was the reason a consistent 3 v 2 situation was created in the center of the pitch.

Here Xavi (#6), Messi (#10), and Iniesta (on the ball) will be able to pass around Carrick and Giggs all day -- thus, they have a consistent attacking genesis in a dangerous area of the pitch. Rooney is no nowhere to be found because he's merely following this tactical duties of tracking the deep-lying Busquets. If Park or Valencia tuck-in from their wide positions, the Barcelona playmakers can merely ping the ball wide into space for either Alves or Abidal.

The United back 4 could play a higher line, and thus compact the midfield a bit more. However, they will then be vulnerable to dangerous through balls behind them -- which is a huge concern with Barcelona's excellent off the ball movement and the world-class ability by Xavi and Iniesta to provide a killer final ball. 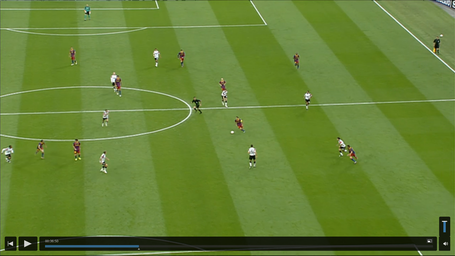 Photo 4: As Barcelona grew more and more comfortable, Xavi began to drift away from his initial deep positioning and the playmaker began to play slightly higher up the pitch. Here he actually finds himself behind United's midfield where he receives the ball from Iniesta -- In this space between the lines, Xavi finds himself the time to turn and run at United's back 4. The result is a terrifying 4 v 4 break for Barcelona (Xavi + Barca's 3 attackers). 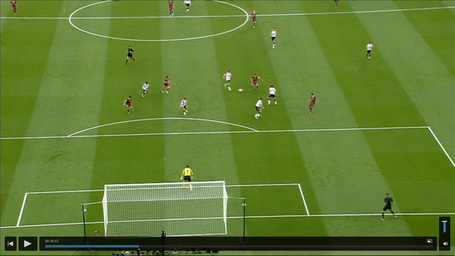 Photo 5: Moments later on the same 4 v 4 break for Barcelona, Giggs is attempting to recover but he has little defensive influence. Villa's width on the break drags his marker (Fabio) wide - but the forward's movement also drags Rio Ferdinand (right center-back) slightly wide to the right. Messi (~26 yards from goal in the center) begins to break across the attack, from right to left (Barca perspective) and this movement drags his marker (Nemanja Vidic) with him - but the Argentine's movement also drags Patrice Evra to the right and out of position. The brilliant Xavi splits the narrow opening to the find the open Pedro and the forward clinically finishes near-post past United goalkeeper Edwin van der Sar.

In review, there was 3 reasons for Pedro's opening goal: (1) Xavi finding space between the lines. (2) The intelligent movement by Villa and Messi on the break dragged their markers away from Pedro and created attacking channels for Xavi. (3) Poor defending by Evra.

There was a tactical reason to United's equaliser -- after sitting back for about 15 minutes and also by falling behind a goal, it appeared that Fergie had instructed his side to relentlessly press Barcelona again in their own half of the pitch - specifically getting his central midfielders higher up. On a side note to this point, Fergie could also be seen minutes earlier instructing his attackers to "spread out." - Perhaps in an attempt to counter in the space behind Barcelona's full-back, both of whom began to play higher up the pitch as the half wore on.

Just prior to the sequence that led up to the goal, Valencia had pressed Abidal and forced a deep throw-in for Barcelona. Once again, Giggs was finding himself pressing up the pitch and he was positioned high during the throw-in.

On the goal sequence, Ferdinand won the throw-in and Rooney eventually ended up with the ball - the United number ten played a tidy 'one-two' with Carrick and another 'one-two' with Giggs (who was arguably offsides)  in the penalty box - Rooney then brilliantly finished and United were now level. Barcelona certainly had dominated in the 20 minutes prior to the equaliser, but it could be argued that the Reds' goal was deserved after their pressing earned them the chance for their talisman.

United began brightly with their pressing, Barcelona adjusted well with Xavi and Messi finding space in between the lines, a settled Barca began to overrun United, and the Reds found their equaliser when they pressed again high up the pitch. United were likely fortunate to be level at half but they arguably earned their goal -- it's just that Barcelona arguably deserved more goals themselves. However, 1-1 still felt somewhat fitting.

Perhaps the merit of Fergie's tactics can be questioned but it appears that he placed his hopes on scoring an early opening goal. The kamikaze pressing to start the match declared United's intentions - they were having a go. However, their tactic to simply bypass their own midfield (and Barcelona's) by punting the ball long when pressured in their own half revealed their fear of Barcelona's strength there. Fergie is arguably football's most successful manager of all time and it seems rather silly to imply that he wouldn't be aware that his 4-4-1-1 would get overrun by Barcelona in the midfield. However, by having 3 central midfielders on his bench and by expending so much energy in the first half, it seems possible that the manager wanted a 1-0 or 1-1 scoreline by half - then possibly bring on a central midfielder for Chicharito and switch shape.

Part III of this tactical analysis will examine the 2nd half of Champions League final.