Share All sharing options for: Manchester United pre-season tour squad released: Darren Fletcher will not travel with the club

Manchester United will begin their United States pre-season tour on Wednesday in Boston when they meet the New England Revolution in a friendly. One significant name left off the traveling squad is Darren Fletcher - the industrious midfielder had a mystery virus last season that struck him down for the run-in. There have been no indications the 26-year-old was not fully healed, especially after he even appeared in a match at season's end. However, United will spare Fletcher the burden of travel and he will spend the next few weeks regaining fitness in Manchester. Here is what a club spokesmwoman had to say about the midfielder:

"We tried to accelerate things but we want to give him the best opportunity to be fully fit for the new season. We feel a reduction in the amount of time Darren spends travelling will help him achieve this"

This is obviously concerning because this mystery virus kept Fletcher out much longer than anyone expected last season - and it was fully expected that he would be fit for the season's start. It appears that the Scotland international will suit up for Paul Scholes' testimonial in early August, but at this point, it may be most prudent to plan for the season's beginning without Fletcher - at least until he actually proves his fitness. If his fitness remains a concern, United currently only have three natural central midfielders along with Ryan Giggs - Michael Carrick, Anderson, and Tom Cleverley. It is still likely that the club buys a playmaker but in the mean time, this could be a fantastic opportunity for the youngsters Anderson and Cleverley to increase their influence.

Traveling squad after the jump...

* These players will join the tour after their agreed leave time after their recent participation for their national team sides.

It should be noted, that of the more experienced players, that Darron Gibson and Tomasz Kuszczak will miss the pre-season tour - a likely indication that neither will be with the club next season.

Here is the schedule of matches for United in the U.S.:

Ticket information: Tickets for the matches are available through TicketMaster, but if you want good seats, they are available in the The Busby Babe Ticket Center. Here are some of the average prices for friendly's this summer on U.S. soil. 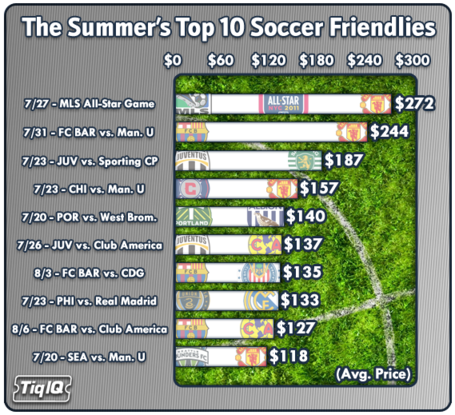 Will you be attending any of these matches this summer? If so, which ones?