Why football really can matter - my photos with Bryan Robson, Paddy Crerand, and the Premier League trophy

Share All sharing options for: Why football really can matter - my photos with Bryan Robson, Paddy Crerand, and the Premier League trophy

On this past Friday evening in Seattle, I had one of the most incredible experiences of my life - I was fortunate enough to have met both Bryan Robson and Paddy Crerand while also getting the chance to put my hands on the English Premier League trophy. What a beauty - the trophy, not Paddy nor Captain Marvel - or maybe they are, beauty lies in the eyes of the beerholder or football fanatic. I went to bed that night with a feeling of euphoria and even some disbelief from my wondrous night. Here is a photo of a certain TBB blogger with Paddy, Robbo, and the trophy: 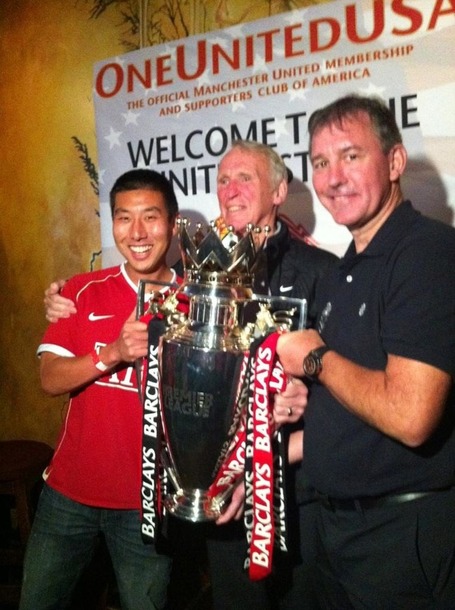 The next morning though, while having breakfast at a cafe outside of CenturyLInk Field prior to a Seattle Sounders match, I received some horrifying news that a friend of mine had been killed while serving in Afghanistan. The high that I had from the previous night was quickly sobered. I was in shock. I honestly do not remember many details of the next few hours but I know that I felt incredibly silly and guilty for going inside to watch some damn game. There were seven goals scored in this match - I may have watched a few of them at most - I aimlessly stared at nothing in particular.

Now, this post may end up being disjointed. It may end up being random. It may even be inappropriate. I'm not even going to bother in editing this. Something like this should perhaps be a private issue. I really don't give a **** right now.

I have learned though - football matters.

I have been completely oblivious to football news in the past few days and that includes anything United related. However, I was chatting with a fellow a SBN blogger on Google chat earlier and he offered up this advice to me, "this thing (writing) we do, it can be helpful." I still didn't feel like writing but I did feel better after I started thinking about this silly game that so many of us love.

The power of this game. The only normal moment that I have had in the past few days was sitting at a pub here in Seattle, in the rain, and watching the women's World Cup final. Sitting around tonight, I began to think about this past Friday and how the club that I love most is only a few miles from my house right now here in Seattle. I couldn't help but to think how my friend would have loved this all.

My last night out with him was a few days before he deployed again - we went to the MLS Community Shield match between the Seattle Sounders and Colorado Rapids with a group of friends in March - the night was followed by "one more drink" - which was like 8 shots of Jameson and beers - I don't even remember the last hour or so that I spent with him but I know it was ******* great. He enjoyed football - but he much more enjoyed that it gave him an excuse to hang out with friends and throw back some drinks. If I tried to explain to him that Wayne Rooney prefers to play withdrawn and between the lines rather than as a true-nine leading the attack line, he'd look at me like I was talking to him in Mandarin - he then would simply drink more beer so that he could possibly drown out this tactical babble.

I love this sport and I quite clearly enjoy at attempting to understand it better through analysis. Many love this game because of the raw drama and theatre that ts provides. Some simply love it because it offers up an excuse to throw back some pints with people that you care about and who's company you enjoy. It's transcendent. It's brilliant. It matters. It makes people happy. It can possibly be soothing when you just feel pain.

United is in town. I will go the the private training session tomorrow, enjoy myself, and make an attempt at normalcy again. The following night, I will go to the friendly between United and the Sounders. Life is both incredibly so amazing and tragic. Perhaps it's life's vulnerability that can make us appreciate the good moments - maybe one cannot exist without the other. Anyway, I suck at pictures but I promised to take some for Friday. Uh, sorry that only few ones that I have include me in them. Here's another one that I got with Robbo: 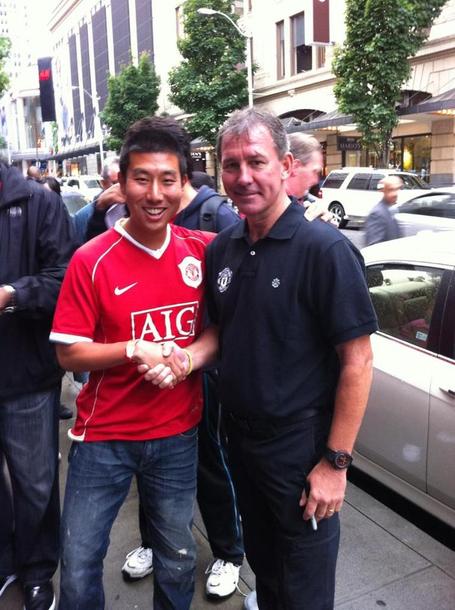 I apologize for this ramble. There is a reason why I haven't put up any content for a few days and it's not because I'm lazy. Well, not entirely.