Share All sharing options for: A breakdown on how Manchester United demolished Arsenal FC | a 10 second non-scoring sequence was a microcosm of the entire match

In a perfect laboratory with all things being equal, a 4-4-2 will struggle against a side that deploys three players in the center of the park. Quite simply, the 3 v 2 numerical advantage in the center, which is generally the most important contest on the pitch, doesn't allow the 4-4-2 enough possession. Hence, they become overrun. However, Manchester United's (fast, fluid, and interchangeable) 4-4-2 this season, one in which the strikers and wide players often interchange by coming both deep and central, can prove to be a nuisance to a 4-1-2-3. A disjointed Arsenal FC side learned this at Old Trafford on Sunday when they were humiliated 8-2 by United. Courtesy of FoxSoccer.tv, here are some images of a ten second sequence that displayed how United's intelligent off the ball movement, quick passing, interchanging broke down Arsenal. This quick and non-scoring sequence in the 8th minute of the match turned out to be quite revealing:

Photo 1 (United attacking from right to left from the camera's perspective): United central midfielder Anderson (closest player in Red that is actually facing the camera) lays off the ball for Patrice Evra (#3 | left-back). Anderson then moves towards the left touchline and drags his marker (Arsenal central-midfielder Aaron Ramsey #16) wide with him. 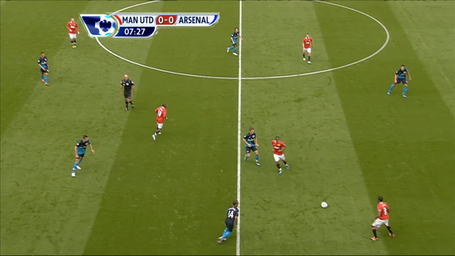 Photo 2: Ashley Young (#18 | left winger) moves towards the space that Anderson just left unoccupied. His marker, Carl Jenkinson (#25 | right-back | bottom left of screen in blue), hesitates to follow and Young is now free in space after he tucks in central. Anderson has successfully dragged away Ramsey (#16) from that space as well. On the top of the photo, Arsenal central-midfielder Tomas Rosicky (#7) is occupying United's other central-midfielder Tom Cleverley (#23) in the center circle. 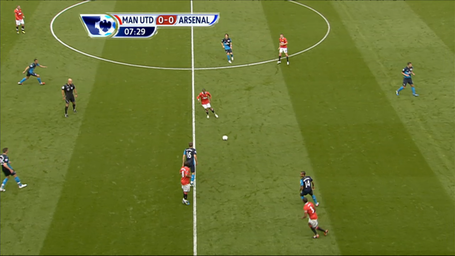 Photo 3: Young (on the ball) has now received in space and has had the time to turn and look up the pitch. Ramsey (#16) has now left Anderson (#8) to Jenkinson (left of photo and dropping back) but is too late to close down Young. Arsenal holding midfielder Francis Coquelin (#39 | just above the referee in the photo and facing Young) has now come forward to close down the unoccupied Young. Wayne Rooney has come deep (United player in the top left of the photo) between the lines of opposition midfield and defense - a space that is unoccupied now with Coquelin advancing forward towards Young. 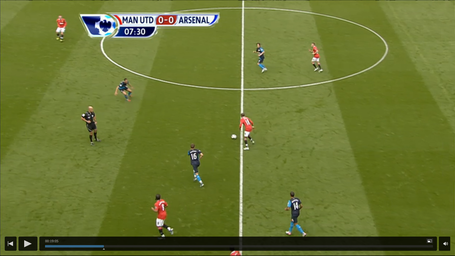 Photo 4: Young (#18) quickly plays the ball to Rooney in that space between the lines. Holding midfielder Coquelin has been dragged out too high and now left-center-back Laurent Koscielny (#6 | top left corner of photo in blue in a dramatic lean forward) is being dragged out high towards a deep-lying Rooney. 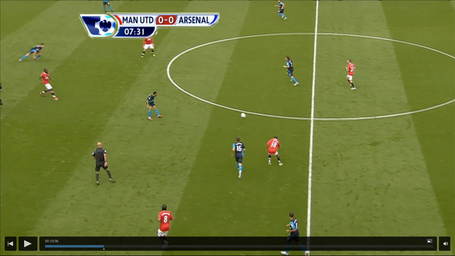 Photo 5: It is now Rooney (on the ball) that has received in space and quickly turned to look up the pitch. As Coquelin (#39) and Rosicky (#7) both scramble back to close down Rooney, Koscielny (#6 | right in front of Rooney and now facing him) has also committed himself to challenging Rooney. As this is occurring, Rooney's partner up front, Danny Welbeck (#19 | striker), is intelligently making a diagonal run from the left towards the right edge of the box into the space that Rooney has left while successfully dragging out Koscielny from that space. Space behind Koscielny has been successfully created. Young (#18 | bottom central of the photo) has began to dart forward. Nani (top central of screen in red | right winger) has done well to stay near the touchline and provide width, thus his marker can't tuck in and offer help with narrow positioning. 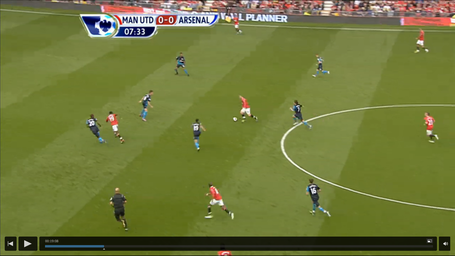 Photo 6: Welbeck's (#19)  movement towards the right side has dragged his marker Johan Djourou (#20 | right-center-back) out with him and a huge channel has now opened between Djourou and the right-back Jenkinson. Moments earlier, Young anticipated this and had already begun his run into that space. Ramsey fails to follow and Rooney slips Young through the gaping channel. Only a poor first and second touch from Young prevents him going clear on goal and and this provides Jenkinson time to close him down. 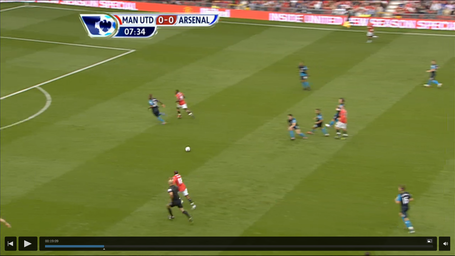 United's pace, intelligent movement, and their technical ability to play in tight space is allowing them to play incredibly fast and fluid football at the moment. It has allowed them to evade some of the usual troubles that a 4-4-2 shape has against a three-man central midfield. It starts up front with the intelligent deep movements of Rooney and Welbeck - this is dragging out defenders and creating space in behind them for midfield runners. Quite often though, it is the midfielders who provide the genesis of this attack in it's infant stages. Who knows if it can work against the best (FC Barcelona), but it certainly can dismantle a depleted Arsenal side. The interchanging between the strikers, wingers, and central players can only be accomplished with a certain understanding between them - it is quite incredible this is happening so early in a season with such young players. It is quite fun to watch as well.