Manchester United head into the second leg of their Europa league tie with Athletic Club (Bilbao) facing a 3-2 defecit. The Basque club were well worth their lead that they take to Spain on Thursday through goals from Fernando Llorente, Oscar De Marcos and Ikier Muniain. Wayne Rooney scored our two goals (The opener of the match and the last goal of the match).

At the Weekend Manchester United went top of the Premier League as we comfortably beat West Bromich Albion 2-0 at Old Trafford. Another two goals from Wayne Rooney sealed the deal as Manchester City slumped to a 1-0 defeat at the Liberty stadium. If United win the title, we can say a big thank you to Swansea City.

Bilbao meanwhile lost to Osasuna 2-1. Fernando Llorente was benched, but came on at halftime with his team 2-0 down. He grabbed a goal yet could not fire his team to a draw. The fact that both he and the much lauded Javi Martinez were benched says all you need to know about their priorities. They, in stark contrast to us are putting the Europa League over the domestic League.

There has been talk of the impressive Fernando Llorente maybe missing out due to injury, yet expect him to start.

The big news is that Antonio Valencia returns. The winger was in top form too before his injury so hopefully he can hit the ground running if he see's the pitch. Paul Pogba also travels. The hugely talented youngster (Im back on the Paul Pogba bandwagon, after falling off in a big way) made a surprise return to the first team after coming off the bench against West Brom. This was followed by reports of him agreeing to stay at the club in favour of a move to Juventus, but this is yet to be confirmed.

Now for the Home team.

The big news is that Fernando llorente is fit. There had been rumours that he could miss out due to injury, that would have been a massive plus for United, given how well he done in the first leg. Maybe Javi Martinez could be pushed forward into midfield, maybe not. 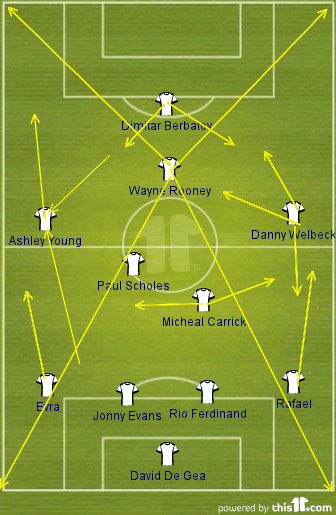 Yes I know there are lots going on here. Most noteably, Wayne Rooney. I have used those four arrows because I feel he will need to cover every single blade of grass for us to have a chance of going through. (Method to my madness). We could use Welbeck's industry and quality out wide, and by all reports, it seemed as though he excelled there on Sunday. Ashley Young will provide the same on the left. Young Rooney and Welbeck will provide plenty of flexibility and fluidity in the final third, with Berba hopefully hanging onto the ball long enough for us to use it. One of the problems in the first leg was us turning over possession far too much. Dimitar Berbatov could/should help try and solves this problem

Rafael and Evra will bomb down the flanks. Carrick and Scholes will hopefully provide ample cover for them while retaining possession and spraying the ball like we are so accustomed to seeing.

Rio and Jonny to continue their partnership at the back. Both they and De Gea will need massive games if we are to win. They will also need more protection from the midfield than they got in the first leg.

We know what to expect from Bilbao. Plenty of pressing. Quality on the ball. Ariel threat from Llorente. Assured passing. And a little more Pressing!. We need to deal with the pressing by working equally as hard.

I think this could end in a number of ways

Bilbao run out easy winners. They Showed me plenty in the first leg. They are such a good team and have a great manager, Their pressing caused us endless problems.

Manchester United lose on away goals - Maybe we grab a 1-0 win or a 2-1, but the damage was done at Old Trafford. Too many times that has happened in Europe this season.

A United victory within 90 minutes. a 3-1 or a 2-0. I don't think we can play much worse than last week. Our away form has been fantastic too recently

I'm going for option two. I think we might squeak a win, but lose out on away goals.