5 Discussion Points From The Wigan Whammy

Share All sharing options for: 5 Discussion Points From The Wigan Whammy

This thing called life has gotten in my way from providing our usual post-match analysis for the 0-1 defeat by Wigan Athletic last night. I had a somewhat distracted viewing of Manchester United's uninspired performance at the DW Stadium and I simply don't have the opportunity to watch the match for a 2nd time so that I can provide an adequate tactical analysis. Nonetheless, I have a few simple thoughts from the match and I thought they could perhaps provide some discussion points for the community here at TBB. Without further ado, here they are:

1. Kudos to Wigan - Prior to Wednesday's night encounter with United, Roberto Martinez's side had only suffered defeat twice in their last nine matches -- and their recent defeat to Chelsea FC was undoubtedly due to some dubious decisions by referee Mike Jones. They are in a fight for Premier League survival, but in what has become typical in recent seasons, the Latics' rise is coinciding with the bloom of spring.

In their unorthodox 3-4-3 system -- at least in modern football when one ignores recent Serie A trends -- Wigan pressed high up the pitch in unison, closed down instantly in midfield, and used fluidity and pace in attack. It seemed that United's defenders were often vulnerable in space and in contrast, we were mostly dull and predictable when given the opportunity to attack ourselves. We've been prone to pressing in recent seasons -- most notably to FC Barcelona -- but perhaps more alarmingly, we've been to non-elite sides this season (e.g. Athletic Bilbao and Wigan). My praise and appreciation for Wigan is bringing up moments of deja vu from our recent Europa League tie with Marcelo Bielsa's side. Paul Scholes didn't feature against the La Liga, nor did he versus Wigan. This brings me to...

2. We desperately missed Paul Scholes - Before I go on saying how much Scholesy was missed blah blah blah... I want to make it clear that Wigan played brilliantly and even had our legendary maestro featured, this match would have been a bigger challenge for us in comparison to our recent run of games. Nonetheless, the simple fact is this -- we missed Paul Scholes.

Now, we're all aware that Scholes is 37-years-old and he simply doesn't have the legs of a Michael Carrick. Therefore, his exclusion for this midweek tie is understandable. But boy, this match highlighted how important the little genius has been for us these past few months. Since his return from retirement, he's started in 9 league matches and he also came on as a substitute in 3 other matches. Basically, he factored somewhat into every league match since this return. During this time, United had taken an impressive 34 points from a possible 36. Tactically, United had grown comfortable into a side that patiently pinged the ball around in the back and then looked for thrust from the front four when Scholes and Carrick found the right gap to probe in attack. From the early seconds of this match, it was clear that United had lost this control without Scholes. This diagram below is a bit dramatic, but it does do decently well to exemplify the difference in control from when Scholes is on the pitch (last weekend vs QPR) and when he isn't (last night vs Wigan). 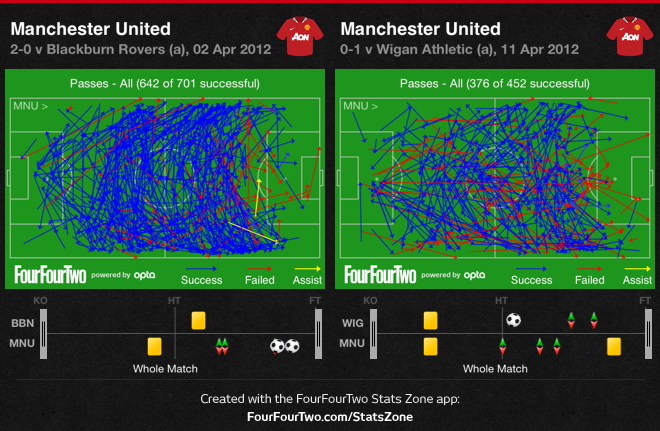 3. We love you Giggsy, but your influence in central-midfield is lacking - Last season, particularly during the run-in, Ryan Giggs' move into central-midfield reinvented the autumn of his career as the winger provided some inspired performances in the center of the park alongside Carrick. However, this season, he's been far from convincing in this role.

Giggsy has certainly earned the right to walk away when he desires, but I think we can all admit he's been mostly poor this season as a central-midfielder. Part of the reason that he thrived last season during the run-in was because he was free to roam and create because Park Ji-sung was in incredible form as the left-winger. The Korean winger isn't a traditional winger and he prefers to come inside and be combative, The tactical awareness of Park, and Giggs, allowed both to be interchangeable and the industry of the of the former liberated the latter to freely roam. Furthermore, Rooney's industry in the center further freed up the Welshman.

This season though, Park's form has declined and perhaps because of this, Giggs' limitations as a central-midfielder were masked (or been exposed). He's been prone to being too vulnerable with possession and he's continually killed United's rhythm in attack with his loose passing (*) 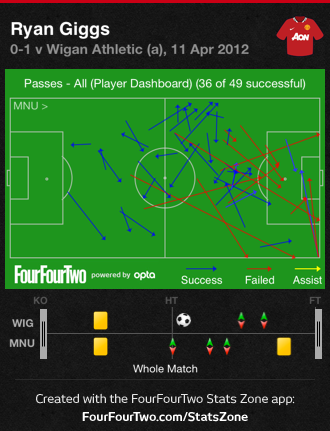 I hope Giggs returns again for another season, but his on-the-pitch role is likely limited these days. His crossing is still good and he's even been effective as a late-match substitute. In addition, his leadership can't be quantified. But perhaps, we've finally reached the point where his on-the-pitch contributions are best optimized as a late game substitute -- and maybe limited as as central-midfielder.

4. Welbeck or Chicharito needs to find form - Wigan was a setback, but consider perspective -- we still have a 5 point lead in the title race with 5 games to go. It was also our first league loss since near the new year when Newcastle ran us off the park.

However, it's a bit concerning that both Danny Welbeck and Javier Hernandez (Chicharito) aren't even close to being in peak form right now. Chicharito provides value by sitting on the shoulder of the last defender and creating space underneath for Wazza, along with the obvious benefit of his finishing ways. However, the Mexican striker hasn't been bagging goals and this has highlighted his limited all-around game. In sharp contrast, Welbeck brings a solid all-around game but his finishing is far from clinical. If Chicha can't bag goals, then we should probably roll with Welbeck at this point. However, the latter's failure to finish is frustrating so the calls for Chicha are understandable. Bottom line though is this... one needs to fine form and offer what they do best. Wazza will compliment you both if you can offer your typical strengths. To be quite honest, I was missing Dimitar Berbatov on Wednesday....

5. Time to close it out with our current first-choice guns? - The benefit of being eliminated from the FA Cup and Champions League at this stage of the season is that we don't have to worry much about a congested fixture list. Therefore, we can essentially run out our first-choice team each week. However, a lack of a congested fixture list lacks opportunities for the likes of Tom Cleverley, Nani, and Chris Smalling to get games. At this point though, we simply need to close out this title race and play the players who have shown decent form as of late: Rio Ferdinand, Jonny Evans, Rafael, Patrice Evra, Carrick, Scholes, Young, Valencia, and Rooney.

Many other squad players are obviously hugely talented, but with only a game a week, it's time to roll out the current first-choice guns and let them secure title number 20. If we're fortunate to experience this smooth landing to another title, let the squad competition commence again in the summer.

Offer us your thoughts for discussion. What was on your mind after this loss? The idea of this post was to promote discussion.