How might £20m transfer rumored target Nicolas Gaitan fit in at Manchester United?

Share All sharing options for: How might £20m transfer rumored target Nicolas Gaitan fit in at Manchester United?

Quite often, where there's smoke, there's fire. In the case of Benfica's Nicolas Gaitan, the smoke is in the form of continual rumors that the Argentine is on his way to Old Trafford. Six months ago, after there were reports that Gaitan had signed a new five-year deal with Benfica and that his release clause was believed to be in the region of £40 million, there were rumblings that United had been watching the midfielder for quite some time. After that, back in December, rumors emerged that United may had made a €30 million offer for Gaitan. The latest plume of smoke suggests that United have agreed to a £20 million transfer deal with Benfica and that the difference in money from previous rumors is made up by having Fabio join the Portuguese side on loan for a season and Federico Macheda joining them on a permanent basis. It's important to remember that nothing has been officially confirmed and there are some, such as James Ducker of The Times, who are adamant that Gaitan is not on his way to Old Trafford.

This isn't a write-up debating the validity of these rumblings. If that's the sort of information or discussion that you're looking for, it can be easily found elsewhere. Instead, I want to provide a brief introduction to Gaitan, provide a scouting report, and then discuss on how he might fit in at United if he were to join the club in the summer.

The 5'8" Gaitan is a 24-year-old that joined Benfica in the summer of 2010 from Boca Juniors for a fee believed to be in the region of €8.4 million. At Boca, he emerged through their youth ranks and he debuted for the Argentine giants in 2008. At that time, there were continual comparisons for Gaitan to enganche Juan Roman Riquelme. During his two seasons at Boca (*), he scored 12 goals and provided 11 assists in 66 appearances.

(*) In additon to Gaitan's two full seasons for Boca, he additionally featured in one game for them during the 2007-08 season. But basically, he spent two seasons there.

This is Gaitan's second season at Benfica and during his time there, he's scored 10 goals and provided 13 assists in 50 appearances. United supporters may be somewhat familiar with him as he featured twice versus the club in two UEFA Champions League group stage matches this season. After the first, manager Sir Alex Ferguson was apparently quite impressed by the player. Gaitan furthered featured recently against Chelsea during a Champions League quarter-final tie. Internazionale and Paris Saint-Germain are other clubs that are rumored to be interested in the player.

Gaitan is a technically gifted player that makes very good use of the ball. His first-touch is superb as is his close-control and this is a vital skill when he is marked tightly or closed down quickly. This is especially helpful versus sides that intensely press or when his side is in the attacking third versus deep-defending sides where space is limited. His vision and passing range is good as well and this allows him to quickly combine for one-touch passing moves, whip in dangerous crosses from the flanks (1.7 successful crosses per game in Champions League this season at 27.1% success rate), or provide defense-splitting through balls (0.3 per game). This has also allowed him to create 2.5 key passes (chances) per game. Furthermore, he's also tricky and pacey on the ball as his 1.5 successful dribbles per game and 2.7 fouls won per game helps exemplify.

In Benfica's 4-2-3-1 system, Gaitan typically plays as one of the wide players in the attacking-midfield line. However, he's not a true winger. He instead tends to drop deep and centrally so that he can receive the ball in space. From here, he likes to turn and have a go at the full-back marking him and this is generally done at speed because of the space he had to start with when he picked up the ball. The recent two-legged tie versus Chelsea displayed his playing style and tactical role for Benfica when deployed on the left-side. This chalkboard below shows how Gaitan won six fouls when he was challenged when trying to receive the ball in mostly deep areas. When the Argentine was able to turn, he carried the ball forward and tried to take-on defenders higher up the pitch. Again, because this was often done at speed, he was able to win 6 take-ons in the first leg versus Chelsea.

In the second leg, Chelsea adjusted by having their right-back Branislav Ivanovic stay deeper. Gaitan received the ball higher and nearer to the left touchline -- not too different to where Antonio Valencia typically receives the ball on the opposite right touchline for United -- but he had much more difficulty in this space. He was 0/4 on take-ons and Ivanovic had inside cover from both right-center-back David Luiz and holding-midfielder John Obi Mikel in this space higher up the pitch. 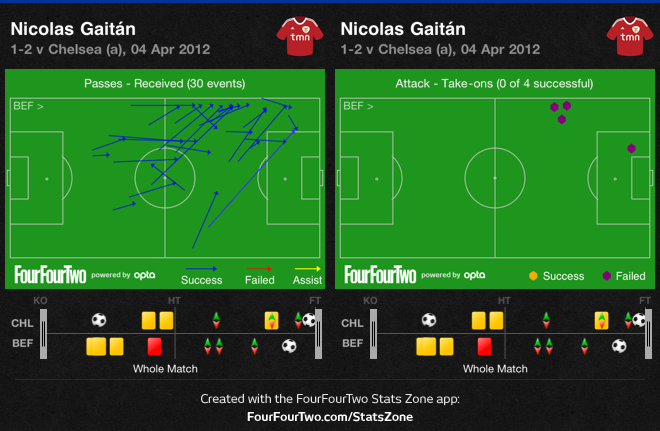 Gaitan is much more effective when he's able to drop deep and centrally and despite being a good crosser of the ball, his skills aren't best expressed as a traditional winger. When he comes inside, he combines well with 'number 10' Pablo Aimar. Gaitan is a versatile player as well that can easily switch flanks and it is thought that he can play inside as a 'number 10' himself -- although the latter role isn't one that he's been featured at much while at Benfica.

How would he fit in at United?

The initial reaction by most United supporters is probably that we don't need more wingers. To that I would say what I previously mentioned -- he's not a traditional winger. We have Valencia on the right that provides traditional wing-play and width, Ashley Young on the left that prefers to cut inside near goal, and Nani that can provide a bit of both on either flank. In addition, we also have the tactical swiss-army knife in Park Ji-sung that can nullify marauding full-backs, link-play, and provide his usual energy. Gaitan brings a more David Silva and Juan Mata style of play in that he prefers come inside and also work the space between the lines in the attacking third. From here, he could combine with Wayne Rooney -- as he does with Aimar -- and look to provide a final killer pass. Perhaps if Gaitan were to grow more comfortable and continue to develop, he could eventually play in a 'number 10' sort of role as well at times. Some have questioned his lack of size, however, talented and tiny technical foreign players such as Silva, Mata, and Luka Modric have had little trouble adjusting to the Premier League. At the very least, Gaitan will provide quality variety.

I don't question Gaitan's talent but I do worry about his inconsistent displays and his tendency to drift out of matches. I'd be less worried about this if he were 20 or 21-year-old, but at 24, he should perhaps be more polished for the rumored price it would take to purchase him. However, to be fair, I've only seen him play maybe 7-8 times and that is a small amount of games to thoroughly judge him on. In contrast, it sounds as if Fergie and co. have been monitoring him for quite some time. I believe that United have other more pressing needs but a player of Gaitan's talents would be hard not to get excited about. However, I'd be much more excited if similar resources were used to purchase an Eden Hazard or Iker Muniain sort of player (two players that are younger) or one that is very established (Luka Modric or Javi Martinez). It highly unlikely United could splash their limited cash for two of these sort of players this summer.

Be sure to join us in the upcoming months to discuss potential Manchester United transfer targets. Rather than just cover possible baseless rumors, we'll attempt to provide analysis of such players and offer a take on how that player may potentially fit in at United.