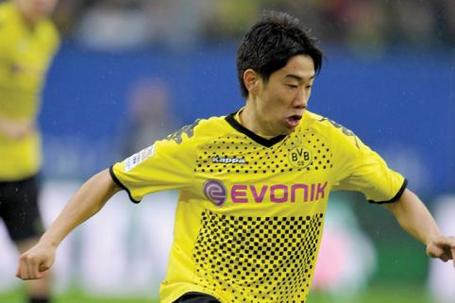 Editor's Note: I was going to post on the speculation of Kagawa not extending his BVD contract but Amen has us covered in this FanPost. His transfer fee would probably to be in the region of £15 million.

One of the things that makes us rabid United fans is that we are always looking for ways to improve our team. And one of the worst kept secrets in European football is that United needs an upgrade in midfield. I say that we pass (and by pass, I mean slink away from the negotiation table in shame we don't have the cash to get him) on Mario Gotze, and go for another player from Borussia Dormund: Shiniji Kagawa. I will give 3 reasons why after the jump.

Seriously, watch the video...the kid has talent. And if you're thinking "even Bebe has a youtube highlight video", then check his stats. 12 goals and 6 assists in 25 games for the current Bundesliga leaders (24 games started). No, he's not Goetz, but he may be just as good. During Mario Goetz's 2 month long absence from the team due to injury, Kagawa has been Borussia's best player. His skill set is very much like that of a Juan Mata. Fast, proficient at one touch passes, but he is also clinical in front of goal, and positionally he can play in an interchangeable front three/most advanced CM in a 4-3-3, just behind the striker in a 4-4-1-1/4-5-1, or in the center of the park in a 4-4-2. He is a fantastic modern CAM.

2. He is young AND experienced.

Kagawa has started 36 games in all competitions for club and country (Japan) this year..and he started 30 last year. He has started 41 games in the Bundesliga in less than two years of playing in that competition and he's only 23. The Bundesliga is one of the more physical leagues in Europe, so despite his small stature, I have no doubt that he would be able to stand up to the rigors of the Premiership.

Kagawa has stated in the past that joining Manchester United would be a "dream". Ho hum, we've heard that before. However, Kawaga has been resisting pressure from his current club to sign an extension similar to the one that Goetz signed recently. If Kawaga doesn't sign the extention, Borussia would be forced to sell him to avoid losing him for nothing when Kawaga's contract runs out in 2013. I think that is a great opportunity for United to swoop in with an offer that makes sense for the club, but also get this kid for far less than what he is worth.

Kagawa fits in with the current United transfer policy so well, it's ridiculous. Obvious talent? Check. Youth? Check. Versatility? Check. Price? ...That's the million dollar question. If we payed Ashley Young money for this kid, I would not be upset. I think he's that good, and he's getting better. I can see Kagawa combining with any three of Rooney, Welbeck, Ashley Young, Nani, Cleverly in an attacking front four that can begin to approach what our attack looked like in 07/08.

So what say you, TBB faithful...should we sign him up???