This game had an extraordinary set of circumstances and performances that are unlikely to ever happen together again.

Share All sharing options for: Don't Panic* - Why the Chelsea game was not so bad after all

Let's look at some of the reasons thrown up to describe the midweek loss, and what a re-watching of the game threw up. But before that, let us accept - the team, as a whole, had a disappointing game. There is not running away from that. With the exception of David De Gea, Rio Ferdinand and one other player lauded below, we were quite average.

The popular perception goes thus: Ramires and Mikel's introduction overran our midfield. Michael Carrick is average, and cannot deal with pressure. We gifted Chelsea the game.

United did not lose the ball in midfield an abnormal number of times - where abnormal is Barcelona@Wembley, or Bilbao@Old Trafford. Indeed, we broadly lost the ball in three ways:

Taken individually, the first and third points are symptomatic of a bad day, a day when things don't quite click. It was the second primarily that almost cost the game for us.
Tony may not be coming back to form anytime soon

Tony initially looked solid against Ashley Cole, however his is a vital role as an outlet when we are under pressure. This was most evident in the games against Manchester City at the Ethiad, and Chelsea at Stamford Bridge, when we lined up in a counterattacking 4-4-1-1. On Sunday, Tony had his head down. He dribbled himself into trouble. He received the ball square more often than not, and moved away from goal. His lack of vision was the killer though - when shown inside by Cole, and under pressure from Cole's wingman (Oscar and at times Hazard), his right-foot dribbles into the midfield were just interceptions waiting to happen. Sadly, there's one instance where Luiz uses this against Tony on the half-way line to snuff out a counterattack. 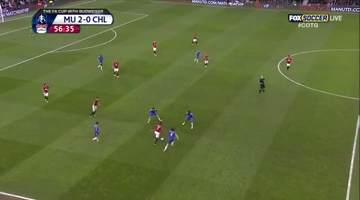 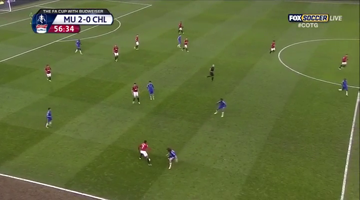 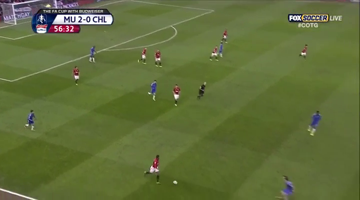 Chelsea were quite excellent after their changes

It is important to realize that part of the result is that Chelsea were really, really good. That part of the equation is somewhat unfairly ignored. To say we gifted Chelsea the game is true only because we failed to protect a two-goal lead. As far as performances go, Chelsea had some standouts in Juan Mata, David Luiz, Ramires, John-Obi Mikel and Eden Hazard.

Michael Carrick had a blinder

To blame Michael Carrick for what happened is equally unfair. A number of fans were asking for the more direct and powerful Anderson to combat the pressing - what was amazing was that Carrick indeed had a number of dribbles and quick one-twos to beat his man. He was the only player who actually wanted the ball (looking at you, Tom Cleverly) and one would be hard pressed to pick out something he could have done better. He did, however, tire towards the end - this was best shown by a lazy backpass that Evra scrambled to, but he realized this and conciously played more conservatively. What happened, however, was that Carrick had no outlets. 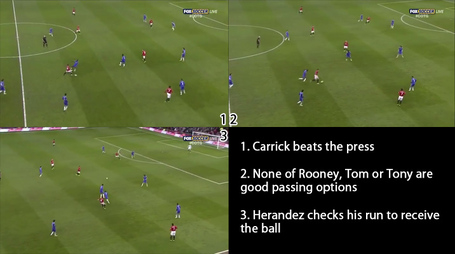 This brings us to another player who had a shocker - Cleverly.

Who are you, and what did you do with Tom Cleverly?

It was puzzling just how unlike Tom this performance was - he seemed tired, dull and static. He probably had more square and back passes than forward ones, and when pressed hurried into making passes that put his teammates into a spot of bother. This was fairly evident on the left flank, when Evra and Rooney were both getting into positions, but Tom hurried on the pass only to get the eyes from Roon-dog. Worse, he moved away from the ball, not being available for Carrick and generally positioning himself quite shockingly. There is a play in the 70th minute where he just stand there and asks Carrick to play the ball into space - Carrick however sees Ramires rushing at Tom, and declines the pass. This was an appalling performance - Tom's engine, vision and positioning were all off. This is also encouraging - he'll hopefully never have a game like this again. Which in turn brings us to our forwards.

Kagawa - not bad, but not good either

With Tom and Tony having shockers, the onus was on our forwards in Shinji Kagawa, Wayne Rooney and Javier Hernandez to provide Carrick with outlets. Of the three, two were game - Kagawa frequently dropped in to provide cover and relieve pressure on Carrick (interesting that this saw Cleverly hare off to the left flank to provide 'width' - he would have been better served staying in midfield since we couldn't get the ball to the forwards anyway) and Hernandez made inward runs to get the ball played into him. However, Shinji had mixed success - by no means did he have a bad game, but he was average and did not seize the moment as he could have. Hernandez was anonymous for the most part until his substitution, but that is unfair on the Little Pea. He was just out-muscled in the air by David Luiz who had a great game stepping up and nicking the ball from our outlets. It makes the decision to bring on Robin Van Persie a no-brainer - we badly needed hold up play, and Luiz was considerably wary of the Dutchman's talent at rolling off defenders.

Wayne Rooney, where art thou?

Ah, Wayne Rooney. As Gene has pointed out, it's not been the best of weeks for Wayne. However, one hoped that the fortuitous goal was the start of the turnaround - not to be. He went missing in the second half - defensively he was between poor and average, while offensively he never dropped to recieve the ball. It is astounding that while Kagawa dropped from the wings to help, Rooney literally did not come out of his 'hole'. It explains the decision to move Kagawa (and later, Danny Welbeck) into the hole when RvP came on - clearly Rooney wasn't doing his job. That said, he was not to blame for either goal, and made fair attempts to defend and maintain shape on both. It was quite disappointing though as quite a few expected him to rise to the proverbial challenge thrown down by the Gaffer. In short, he didn't.

Why this must make you feel better

So in summary, our midfield wasn't overrun, although Tom had a bad game. It is testament to Carrick's form and class that he more than held his own against a trio of hard pressers in Ramires, Mikel and Oscar. However, he had no outlets, and had to make ambitious passes which the excellent Luiz mopped up. At times, it looked like Carrick on his own against 3 very very good performing Chelsea players. In fact, the game was fairly balanced for a large part - the period between the first goal and the second was the only part when Chelsea were truly dominant. If either one of Tony, Tom or Rooney had had an average game, we'd likely be looking forward to the semi-final against Manchester City while gently admonishing the team. As it stands, we travel to Stamford Bridge for the return leg - however, we can rest assured that these set of circumstances will not likely repeat.