The Magic Number is 7 - Can the Red Devils make it 4 with a win in London?

Form Guide: The magic number is 7 - and Sir Alex's boys will be eager to get them quickly to wrap up the title at old friend Arsne Wenger's Emirates stadium on the 28th of April. United were on a wretched run of form, performance wise, since the Champions League disaster but the performance at Stoke suggests they are back on the upswing. The formbook shows only two losses over 18 games for the club. Against the Hammers, United have won 1-0 at home in the league, drawn 2-2 away thanks to that goal in the FA Cup, and won 1-0 at home in the replay. The games, however, have been generally drab affairs.

Form Guide: Big Sam's Hammers sit 12th, with 38 points that sees them 7 clear of the relegation zone. They've had a chequered record in the league of late, with a brace of wins, draws and losses each in their last 6. With Wigan Athletic and Reading to visit, West Ham shouldn't be in danger of elimination, but away games against Manchester City and Everton ensure they have an exciting run-in.

Team News: Defender James Tomkins (calf) is a doubt while Winston Reid (hip) and George McCartney (knee) are also struggling for fitness, so Emanuel Pogatetz is ready to stand in. Midfielder Mark Noble (shoulder) is close to a return, but Joe Cole (hamstring) remains a doubt.

United: David de Gea will probably start, but given the Anders Lindegaard hasn't seen action for a long while now, the manager could swap them anytime. Nemanja Vidic and Rio Ferdinand started the weekend against Stoke City, as did Phil Jones at right-back and Patrice Evra at left-back. Given the depth of his thankfully injury-free defense, we could see wholesale changes. Expect Rafael to come home to his right-back spot, with Alex Buttner having an outside chance at starting too. Chris Smalling and Phil Jones may be given an outing as the central-defender duo, but the noises from Carrington last week suggest that Jonny Evans will take up one of those spots. The other could be filled by Rio/Vida too, if the gaffers wants to put some experience in there. It's worth noting that the Hammers are strong aerially, and scored two beautiful headed goals in the 2-2 draw.

In central-midfield, any of Michael Carrick, Tom Cleverley, Anderson, or Ryan Giggs are possible. A surprise addition to this list is Wayne Rooney - the management may well be experimenting with him in a midfield role with the title within reach. Carrick is our marathon man and will probably start every week till the title is won, but Cleverly is due a game and might well partner him. Giggs and Anderson are unlikely - there simply is no fixture pile-up for the former, and the latter seems on his way out this summer.

United's wealth of attacking talent is well-documented, and it's almost impossible to predict which attackers will start. The mercurial Nani is possile on either wing, while Valencia is a possibility on the right. Danny Welbeck and Shinji Kagawa could also play on the left as interios, while up top Robin Van Persie will be battling with Chicarito and Rooney for a spot. With his goal against Stoke, it is likely RvP starts up top to get another glut of goals, with Rooney or Kagawa playing in the hole. This could lead to a 4-2-3-1 type of formation, with Welbeck narrow and Valencia wide, Rooney/Kagawa and Cleverly scheming between the lines. 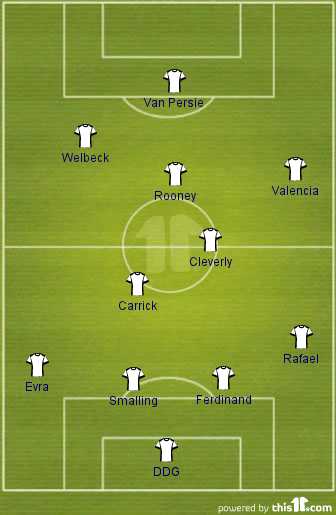 We could also see a more conventional 4-4-2 with Nani out wide on the left. Giggsy was incredible in the FA Cup Draw against the hammers, with moments of pure class - this makes him an outside chance for width on the left if Nani is preferred to Valencia on the right. 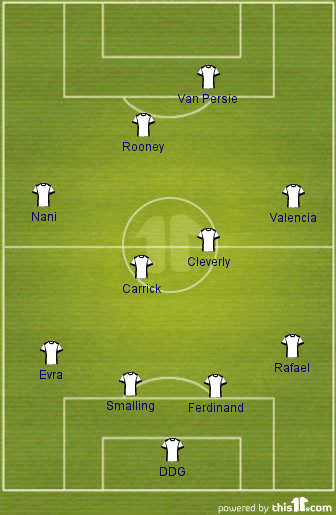 This could be a good time to experiment with our attack to see who stays, and who goes. Predicting this is going to give United fans a lot of fodder for conversation in the coming weeks.