Remember how excited we were when we signed Kagawa and Robin van Persie? We talked up on all kinds of formations to fit both of them and Rooney in. I was recently looking up some of Cox's ESPN articles and found some about United and our players:

Role of the new No. 10 in the Premier League

Gonna write briefly about the No. 10 article first because next few might be pretty lengthy.

In the article Cox mentioned the top team's new creative recruits in Kagawa, Cazorla, Oscar and Sigurdsson... and Liverpool (not a top team, obviously) bought themselves Coutinho in January. But did they all excel as 10s when we're done with 12-13? I'd say most, if not all of them ended up faring better by the flanks than they did in 'the hole'. Even veteran 10s like Silva and Mata ended up playing as 'interiores'. In our case, Kagawa only gradually made himself more comfortable in the No. 10 role towards the near end of the season.

How does RvP fit into United's plans?

Now that the season has ended, I can perhaps start with a conclusion that Robin didn't fit into whatever we planned for our season - instead he was the centre piece and everyone had to amend themselves to fit into his puzzle.

If we were to pinpoint the key factors on our side on how we won our 13th Premier League title, the first key point* is perhaps RvP's blistering form from August to February - 22 goals and 7 assists. During that stretch, judging solely from the scorelines and RvPs stats in goals and assists, I can perhaps safely say that without his brilliance we would've drawn or lost most of our wins during that 7 months. We were so poor on all fronts, especially during the first 5 months, where our attacks were disjointed, our midfield overrun, our shape stretched, our defence chaotic and our keepers rotating. RvP's individual brilliance single handedly kept us in the title race during all the tactical mayhems.

*2nd key point is us shoring up our defence at the turn of the year, conceding more than 2 goals only once in all competitions for 2 full months. 3rd point being that we were unbeaten for all 18 games in between the meaningless 1-0 defeat vs Cluj till the 2-1 defeat vs Real, winning 14 and drawing 4.

But RvP's brilliance came at a price of some of our attackers. Robin's scoring runs cemented his place as the spear head of our attacks - in the first half of the season his goals and assists got us through all but one (damn Spurs) big games. That left Kagawa, Hernandez, Welbeck and Rooney fighting for the 2nd striker spot. And all have since admitted that they themselves are (to varying degrees) disappointed with their season. Perhaps they should also consider themselves somewhat lucky that our wingers fared worse, because otherwise they may have their appearances further halved. Rooney, the worst victim of them all (half by his own fault), then asked to leave in light of his 'positional carousel'.

Crucially, When RvP stopped scoring at will, we generally struggled to attack and that's when the cracks in our system started to surface. This is precisely what Cox had written in his article, but in Manchester City's context:

Sounds similar doesn't it? de Gea's saves, Ferdinand's consistency, Carrick's calmness, Rafael's coming of age maturity and Robin van Persie's instant impact. No key relationships, no system identity. The cause of our problems is different to City's though: de Gea was rotating with Lindegaard in the first 4 months, and our centre backs, midfielders, wingers and attackers all couldn't stay healthy for a consistent period of time. While those were the serious problems we barely managed to swim through thanks to RvP and undying willpower to win in the first half, same excuses couldn't be used for the final few months of 2012-13.

The pre-season talks of changing in formation to suit all our attackers turned out to be 2 failed experiments: 1 being the season opener where Kagawa was the fulcrum to Welbeck/van Persie, Rooney and Nani in a 4-2-1-3; the other being 4-4-2 diamond. All were tried to fit as many attackers as we can but despite my personal opinion that we at times played beautiful football in the experimented formations (particularly the diamond), we were ultimately outmatched and Sir Alex more often than not made in game formation switches to end his experiments abruptly.

But what has happened to United's shape? Van Persie's arrival, along with that of Shinji Kagawa, has resulted in a clumsy, confused approach. In Ferguson's desperation to include as many attackers as possible, he attempted to use a diamond midfield, contradicting United's traditional focus upon width. Players are constantly fielded out of position and there has rarely been a match where United's forwards wide midfielders and central midfielders have all looked comfortable. -Michael Cox

With the experiments failed, we went back to our tried and tested 4-4-1-1 counter attacking football during big games, with mixed results: at first we would often get ourselves a big lead before conceding them then ending the game with a frenzy winner. By March, our goals have dried up and we struggled to stay in the game before ultimately defeated.

If I am allowed to somewhat criticize our title-winning season, this season's problems can be narrowed down to 3: Firstly, when RvP's form dipped, so did our creativity from all over the pitch. Then there's the mentioned lack of key relationships, especially in Carrick and van Persie's case. The last but most important one though, is the missing ability to get us out of trouble after we defended deeply. This was the main factor that failed our big game strategy. This doesn't apply only on our centre midfield but on all our players, which is very shocking to say the least, because some of them used to be brilliant in bailing us out of pressure.

I searched through ZonalMarking's coverage of our big games this season and the tactics we've deployed are largely 4-4-1-1 as per usual. In trying hard to refresh my memories using Cox's articles, I find that in the wins against Chelsea and City we raced to a 2-0 lead in less than 30 minutes time. However, once we allowed our opponents to settle into a passing rhythm we were forced to chase shadows and allowed them to get back into the game, before breaking their hearts with controversial winners. A win is a win, but it doesn't masked the fact that in both games, from the 30th minute onward, we were outplayed and our defence gradually unable to contain the onslaughts. 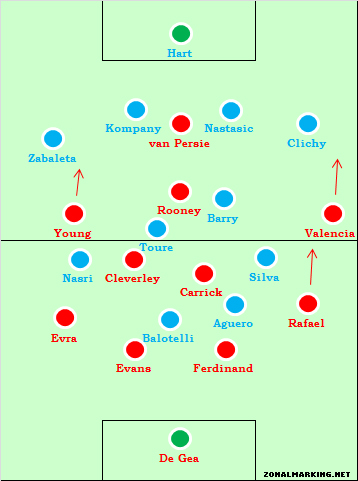 vs Man City -via i1231.photobucket.com

The crucial problem is our inability to get us out of trouble. Even the most consistent performer of the whole year, Michael Carrick, struggled to find an outlet pass when under pressure. Needless to say that Rooney, as the main link from defence to attack, didn't do his job well in both games, but the fault wasn't his alone. Valencia couldn't dribble away from his defenders; Cleverley likewise couldn't find a proper pass to his team mates; Young and Evra's dribbles became ineffective and were often ushered to the touchline for throw-ins; van Persie became more isolated and barely touched the ball, so the option of having him holding the ball almost never existed; and most annoyingly, the defenders opted to clear the first dangers by hoofing them up field which resulted in subsequent waves and waves of pressure upon us.

Did this problem persist for the full season? Yes, because when the attacks and creativity dried up it affected our ability to keep the ball away from our own half and that added back the pressure that were relieved after we sorted out our defence; and No, because we showed what we can do in the Champions League tie vs Real Madrid. 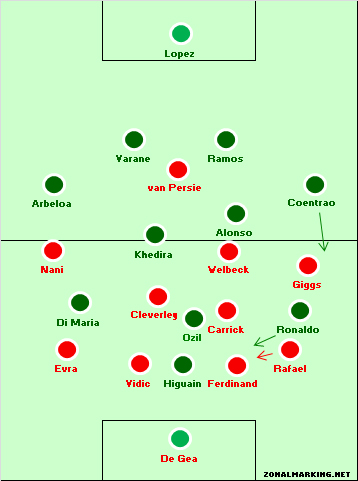 The Real Madrid match at Old Trafford -via i1231.photobucket.com

It is the return leg where we played 60 minutes worth of best football in 12-13 (not lasting 90 is in no fault of our own) that saw us maximizing our 4-4-1-1 counter attacking potential. Of course, we defended well, but in Nani and Welbeck we had 2 options to get us quick transition football - one was able to hold on his own on the left flank, the other just brilliantly dribbled end-to-end. And Giggsy's passing was top notch that night. Needless to say that the manner in which we lost the tie was the catalyst of our decline for the next few months, and we had only our psychologically insurmountable Premier League lead to ensure that we actually have a trophy to end Sir Alex's reign in smiles.

All in all, this season ended with Sir Alex's retirement and our 20th English title as parting gift for the legendary manager. The tiniest tinge of regret lingers on the fact that we could've won more this season, that we have the potential to win a treble, and that our problems can be fixed by better tactical coaching. Perhaps I should leave that to another time and end this lengthy piece with a video season review: