When the going gets tough, Phil Neville gets deep

Share All sharing options for: When the going gets tough, Phil Neville gets deep

The internet is a wonderful thing. Without it, these words literally would not exist. And without it, Phil Neville, Manchester United's assistant manager, former utility player and graduate of the Class of 92 would not be able to drop tantalising messages into the public consciousness ... 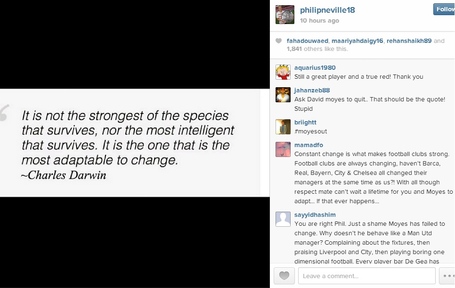 "Ask David Moyes to quit. That should be the quote!" demands jahanzeb88, who adds "Stupid" for good measure. Those words, you'll recall, appear in the appendix to Darwin's The Formation of Vegetable Mould through the Action of Worms, with Observations on their Habits. Anyway, other comments that you can't see above vary from the inquisitive ...

Is this ur way of telling us that Moyes is weak n stupid, Phil?

Although its killing me but I think we should give moyes atleast another season and c what changes he makes, it was never going to be easy replacing the best manager ever. #BELIEVE

... to the frankly peculiar: