In a cloudy season, Manchester United's Official Silver Lining (brought to you in association with Cloud-Be-Gone, Official Silver Lining Partner for the Middle-East) has been Adnan Januzaj. At times embarrassingly superior to his supposed elders, the young man of indeterminate nationality has scored three goals, featured in two fairly mild newspaper exposes, and birthed hundreds and thousands of smiles. Not bad going for a 19-year-old.

Anyway, it's not just United fans that have enjoyed his appearances. Italian newspaper La Gazzetta dello Sport have named him the best teenaged player in Europe. The pink-paged paper described him as "rapid and hyper-technical", and praised his dribbling ability along with — and tBB's Italian is a little rusty, so this might not be quite right — his X Factor looks. 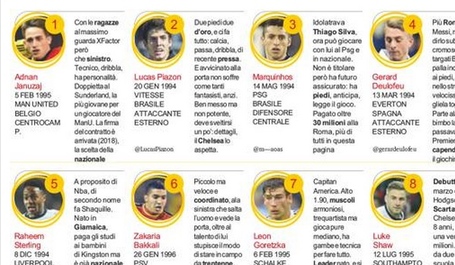 Other points of Premier League interest include Chelsea's Lucas Piazon at #2, Liverpool's Raheem Sterling at #4, and Southampton's Luke Shaw at #8. Januzaj, thank almighty Pazuzu and his army of screaming wind-demons, extended his contract at United earlier this season until 2018. And topping this list definitely counts as a trophy. Yes? Yes. Good.