Adnan Januzaj's performances in his debut season have seen him compared to Cristiano Ronaldo's early years at Manchester United, and the statistics seem to back it up.

Some of you have been demanding more stats-based analysis from TBB over the past few months. Those of you who weren't banned for asking can now rejoice, because here, we present to you: stats! Chances created! Pass completion percentages! Assists! Tackles! Conversion rate! Dribble success! It's all here! Peel apart the stuck-together pages of Soccernomics and get involved, stats fans. USA! USA!

The subject in question is a comparison that's been doing the rounds between Cristiano Ronaldo and Adnan Januzaj's first two seasons in charge. So, without further ado: 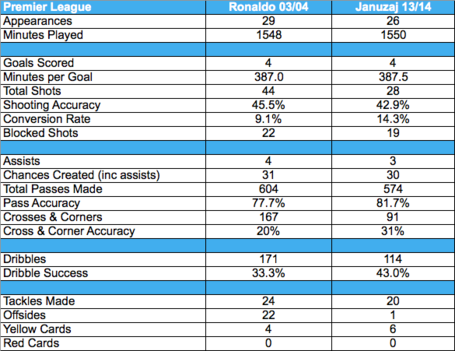 Now, the caveats. 'Chances created' is a statistic which is measured by any pass before a player shoots, and is therefore completely worthless for reasons we would hope we wouldn't have to explain. As is 'pass accuracy', since a two-yard hospital pass which reaches the target but ultimately loses possession counts as a completed pass where an ingenious defence-splitter let down by a forward not seeing the run in time does not, among many other problems. Dribbles, dribble success and tackles are all so objective that it's impossible to measure too.

So, we can completely disregard all of those. But nonetheless, the minutes played, goals scored, and assists are all level. We also see that Januzaj is a lot less trigger-happy too. The only really massive difference is in offsides - whether that's Januzaj trying to play deeper or him possessing better awareness than Ronaldo, we'll leave open to you.