Never again: Tonight's XI could all be gone this summer

A summer of change awaits, and many of United's side this evening will never walk out for the team at home again. Enough, in fact, for an entirely reasonable (albeit slightly unlikely) XI.

Share All sharing options for: Never again: Tonight's XI could all be gone this summer

As United gear up for their final home game of the season, and fo a major summer overhaul, a thought occurs. It's possible, just about, with only a small amount of fudging, for Ryan Giggs to pick an XI entirely composed of players who will never appear at Old Trafford again. Er, unless they move to a team that visits. But even then, they'll have to use the away dressing room, and everybody will ignore them and they'll cry. 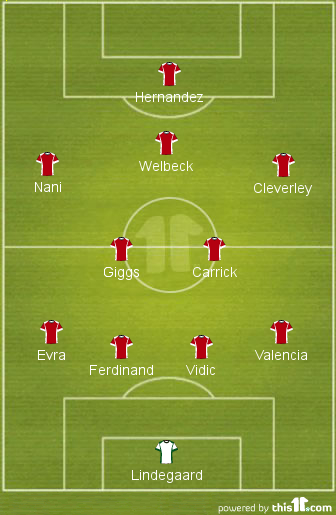 Okay, so the big Dane hasn't been officially linked with anywhere. But we needed a goalkeeper, and Lindegaard announced on his arrival that he hadn't come to United just to pick his nose. With David de Gea firmly established as United's first choice for the foreseeable future, it might be time for him to look elsewhere. Or reconcile himself to nose-picking.

No rumours of departure as yet, but that old, scary Valencia that threatened to resurrect wingplay ain't never coming back. Will have one year left on his contract at the end of the season, and while David Moyes was keen to keep him, the new man may not be. Was linked to Real Madrid in February, for some reason.

Off to Inter. Godspeed, Nemanja.

Contract expires at the end of the season. Has let it be known that he would like to stay, but is hampered by (a) the natural progression of time and the consequent decline in athletic capability, and (b) being an increasingly tiresome berk.

(Isn't in the squad for this evening, irritatingly, but we'd already drawn the diagram. If it vexes you too much, drop Carrick back and pop Fellaini into midfield.)

Contract expires at the end of the season. Linked with a move to Italy, particularly Inter, and it would be weirdly tidy if Evra and Vidic left together, having arrived together years ago. However, a number of recent Luke Shaw-centred stories have suggested that Evra might be retained for another season as part backup, part mentor.

Won't become United's new manager. Might become United's new assistant manager. Might play for another year, yogic capacity and new manager allowing. Might leave the club altogether and learn to manage elsewhere. Might be sidelined by the new man, stew mutinously while in charge of the reserves, then lead a bloody coup the moment things get a bit sticky. What we're saying is, we don't know. Nor does he.

His contract runs until the end of 2014/15, with an option for a further year beyond that, but so startling has been Carrick's drop in form that it would be no surprise if he were available this summer. Having said that, Carrick is one of those peculiar players that is never linked to anybody, ever, so who knows what could happen. A Newcastle homegoing, maybe.

The Bradford Busquets has many admirers throughout the world of football, if not in the stands at Old Trafford, and Roberto Martinez is particularly keen. "I think he is as good a talent as we have in the English game, and he is still growing," said the Spaniard, who has a certain amount of shopping to do. Leon Osman isn't going to replace himself.

The transfer request that did for David Moyes ... maybe. It's not clear whether Welbeck's reported unhappiness went as far as a formal request, and the timing was probably coincidental, but there was certainly something deeply symbolic about the local lad, who'd been with the club since the age of nine, looking elsewhere. Tottenham are lurking, apparently, but they'd be one of many.

Depending on which newspaper you read, Nani is either definitely moving to Juventus, for a fee somewhere between £4m and £12m, or is definitely staying at Old Trafford, thanks to Louis van Gaal vetoing the move. Verily, his inconsistency extends even unto his transfer rumours.