Louis van Gaal and the resurgence of the 3-man defence

Louis van Gaal is bringing the three-man defence back into fashion.

Share All sharing options for: Louis van Gaal and the resurgence of the 3-man defence

The back three certainly isn't a new invention, though it is enjoying a resurgence in domestic and international football at present. Louis van Gaal led a pretty unspectacular Netherlands side to a World Cup semifinal with a 3-4-1-2, while Costa Rica and Mexico also progressed beyond expectations with a similar formation. Now it's hitting domestic football outside of its natural home in Italy, and van Gaal is leading the revolution.

"I can change back if the system doesn't work," said van Gaal in the aftermath of Manchester United's 7-0 mauling of the LA Galaxy on Thursday, though after his World Cup experience, his intentions were clear -- he wants to implement a back three at United. "I never go back, I always want to see the future," he added.

But while the back three does indeed seem to be on the rise, van Gaal's system is as much a rediscovery of the past as a glimpse of the future. 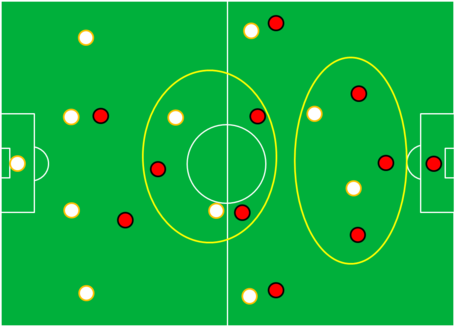 The back three first rose to prominence through Rinus Michels in the 1970s, with his legacy of "Total Football" continued by his compatriot Johan Cruyff's fluid 3-4-3.

However, in its modern, more reactive form, the back three arose to break the dominance of the 4-4-2 in the 1990s, thanks to its well-populated midfield and the presence of a spare man to sweep up in defence (pictured).

These advantages were cancelled out with the advent of modern, single striker formations like the ubiquitous 4-2-3-1 and 4-3-3, in which the two spare men were deemed unnecessary and the wing-backs could be overrun by more attack-minded full-backs. With these systems still so prevalent, why has there been a recent resurgence in the back three's popularity?

It can perhaps be partly explained in terms of broader tactical trends; in style and speed as much as shape.

With the demise of Barcelona has come a reduction in the obsession with possession football and ‘winning' the midfield battle. Rather than controlling the ball, controlling space has become increasingly important. Jupp Heynckes' fierce counter-attacking Bayern Munich team of pace and power were hardly interested in sideways passes, instead looking to press high, win the ball back quickly, and counter-attack before their opponents could retreat into an organised defensive shape.

An even more extreme example is Atlético Madrid under Diego Simeone, who play with a 4-4-2 formation written off during the ‘possession period,' when three central midfielders were seen as a requisite for all major teams. Indeed, Atléti won La Liga last season having played many of their games with remarkably little possession.

According to WhoScored, Atléti's pass completion over the domestic league season was just 77.3% -- lower than 10 sides in the division. This is a good illustration of how they play, in the immortal words of Brendan Rodgers, with "verticality" -- looking to play direct and into space behind opposition defenders, rather than sideways to the feet of a teammate. Penetration has been favoured over possession, and sitting deep is now as fashionable as pushing and pressing high up the field.

With the increasing success of this style has come a need to counter it. And that, perhaps, is where the back three comes in. Unlike Barça and Spain, who pushed their defensive line high up the field and were eventually found out by these direct, pacey teams, sides playing with three centre-backs tend to sit a little deeper. They have more men back, and more defenders to offer cover. Essentially, it helps prevent teams like Bayern and Atlético playing direct and breaking into space in behind.

Ultimately, it is a defensive, reactive tactic, though one whose World Cup success has been eye-opening.

But even if the logic behind the system is sound, van Gaal must make sure he has the players to suit the system at United. So far, the signs are positive.

United have pretty mobile centre-backs, who should be comfortable stepping out in one-on-ones out wide when the opposition inevitably target the channels between the wing-backs and centre-backs. They're also reasonably good on the ball, which is significant in a system in which they have considerably more duties in possession than in a back two. Luke Shaw and Rafael are both industrious enough to serve as wing-backs, while Antonio Valencia's experience as a full-back under David Moyes means he'll be able to slot in on the right too.

In the centre of midfield, Ander Herrera's box-to-box energy and playmaking from deep means he'll be perfectly suited to a midfield duo, especially alongside a more static player like Darren Fletcher or Michael Carrick. The presence of three centre-backs behind this pairing would ease their defensive responsibilities, and reduce the chance of a goal should opponents slice straight through the centre of the field, as was commonplace in Moyes' 4-2-3-1.

In attack, van Gaal has many options. Depending on whether he plays a classic Dutch style midfield diamond, an Alberto Zaccheroni circa 1998-style flat 3-4-3, or the 3-4-1-2 he's used at the Netherlands and United so far, he'll be able to select many different combinations, hopefully with little disruption to team cohesion. At the World Cup, van Gaal frequently switched his team's attacking shape around, with winger Memphis Depay used to inject more pace and directness -- as one would imagine Januzaj will do this season.

Perhaps as a hangover from the decline of the back three over the last decade, there have always been questions over whether the back three would function as intended in the Premier League. Roberto Mancini's brief flirtations with the system at Manchester City failed, and only small teams like Wigan Athletic and latterly Hull City have played with back threes with any regularity.

But the fears are probably unfounded; fears of the unknown. As with any formation, it has inherent strengths and weaknesses, and it is the coach's job to use these spots to determine how best to shape up. At United, van Gaal has decided that the three-man defence should work. The mobility and capability of the centre-backs, energetic but anchorman-lacking midfield and great variation of attacking options suggest he's right.