Wayne Rooney's inevitable, perplexing march towards a knighthood continues, as he was today named as England's official captain by Roy Hodgson. "I've had a long conversation with him and he is prepared to accept the pressure it brings," roared Hodgson. "I've had no reason to question anything about him."

He probably said some nice things as well, but y'know. As for our own dear captain, well, all credit must go to waynerooneyofficial.com for landing the exclusive interview they all wanted.

As a kid I always loved the occasion of watching a big England game on the television. Back then I had a burning ambition to play for my country. Now to be appointed captain is beyond my wildest dreams. I would like to thank Roy and the coaching staff for having the belief and confidence in me to do the job.

Incidentally, Wayne Rooney's official website is quite the thing. Here, for example, is the front page, with which Wayne welcomes you to his little corner of the internet: 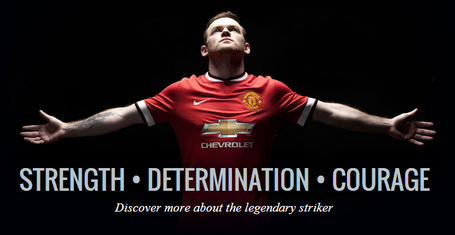 Modesty • Humility • Self-effacement ... and that Chevy logo isn't getting any better, either.