Midfield star will not be leaving Juventus, apparently

The Arturo Vidal dream looks, if not totally dead, then at least very, very unwell.

Share All sharing options for: Midfield star will not be leaving Juventus, apparently

Rend the garments! Claw at the hair! Sound the dolorous trumpets! Arturo Vidal, Juventus and Chile's midfeld maniac, will not be coming to Manchester United. Probably. Possibly? Well, no. Probably. That, or he's having so much fun on his pre-season tour that he never wants to go home again. 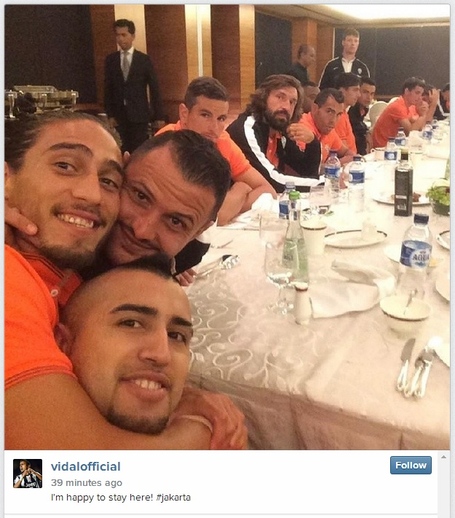 Obviously, there are still straws to be clung to here. Maybe he does mean Jakarta, though United probably don't need a combative midfielder who refuses to leave Indonesia. Maybe the picture is meant to demonstrate that he is in fact being held against his by Simone Pepe and Martín Cáceres; here, the exclamation mark doesn't denoteexcitement, but a cry for help. Save me, Louis van Gaal! You're my only hope!

... no, probably not. Oh well. It was fun while it lasted. And don't Andrea Pirlo and Carlos Tevez look weirdly furious in the backgound? Clearly, neither has any time for this kind of messing about at the dinner table.