Danny Welbeck's move to the Emirates is back on, and is making rapid progress.

Share All sharing options for: Arsenal and United agree fee for Welbeck

The dead deal lives again. Arsenal's totally on then definitely off deal for Danny Welbeck is suddenly back on, and the BBC reckon that things are progressing at speed. 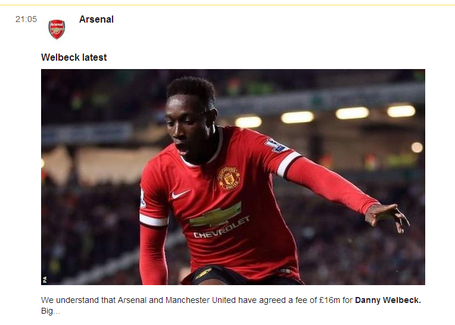 Looks like the player's insistence on a permanent transfer has paid off.

Now, this is a strange one. As we noted earlier, this makes sense for Welbeck and sense for Arsenal ... but makes almost no sense for United. Arsenal are a rival for the Champions League place, and were within a couple of hours of having to attempt to get that Champions League place with Yaya Sanogo up front. Now they are better; they have a very talented forward who is going to get the run up front he's always needed.

Obviously you don't want United to nix the deal and force an unhappy player to sit through a season on the sidelines, with all the knock-on effects this would have on his development. Just as you don't want Welbeck to be unhappy. This has the potential to blow right up in United's face.